Back in March of last year at their services event, Apple announced a new service that was focused on games. This service is Apple Arcade. At the time Apple announced that Apple Arcade would be available “in the fall”. Ultimately, this ended up being mid September with the release of iOS 13. One of the selling points was the ability for it to be on all of Apple’s platforms, iOS, macOS, and tvOS. This part in particular intrigued me, since I prefer playing games on my TV with a controller, which is also possible with iOS 13, tvOS13, and macOS Catalina, as opposed to touch gestures using my iPhone or iPad.

When Apple Arcade became available I immediately signed up and played a few games. The ones I played included “What The Golf?”, “Word Laces”, “Frogger in Toy Town”, “Mini Motorways”, and “Skate City”. I intended to play some other games, like “Overland” and “Over the Alps”. These last two would probably be ideal for a bigger screen.

I played a lot of two of these games, a little of a couple, and a moderate amount of one. The games I played only a little included Skate City and Frogger. I played Frogger to see how it would be in a modern game and Skate City reminded me of Tony Hawk, expect in 2D. I played Word Laces a bit, maybe 100 puzzles, but ended up stopping because it got to be a bit too repetitive.

The two games that I played the most were What the Golf and Mini Motorways. I beat almost all of the What the Golf levels but there was one that I could not beat and eventually gave up.

Last week I cancelled my subscription to Apple Arcade. I did this for a few reasons. The first is that I realized I did not play any games from Apple Arcade games for over a month and keeping the subscription was a waste of money. The second reason is that the games I enjoy playing on my iPhone and iPad are ones that can be done quickly. The last reason is that as much as I enjoyed playing Mini Motorways, which is my favorite out of all of them, I realized that I prefer to own my games and not rent them. The same can be said for my console gaming. I do not have a subscription to those games either, I purchased my console games.

The final reason I opted to cancel my Apple Arcade subscription is the fact that I am not one who plays a whole bunch of different mobile games. Instead, I tend to stick with playing the same games over time. For instance, I play three games every day, Dissembler, Solitaire, and Word Search. These all have daily puzzles which keeps me coming back to the game. I have been playing these, particularly Solitaire, for a very long time; in fact since at least November 1st, 2014 when they introduced their daily challenges. I had intended on playing games on my Apple TV, but never ended up doing so.

Cancelling Apple Arcade was the right decision for me and in no way is a reflection on my thoughts of the service overall. I think Apple Arcade is a great service which allows you, and the entire family, to play a ton of games for a very reasonable amount of $4.99 per month, and even less if you pay annually. If I feel as though I want to go back and play some of the games, or if a must-play title comes out, I can always resubscribe to Apple Arcade.

In June of 2012, at their E3 conference, Ubisoft unveiled a brand new intellectual property. This one was a twist on the genre of open-world games. The game, was Watch Dogs, also seen as WATCH_DOGS. The game was a commercial success with over 10 million copies being sold in 2014. With the game being successful, Ubisoft has produced a sequel, Watch Dogs 2; which is the focus of this review. Given the high level of similarities, with regards to the mechanics, between Watch Dogs and Watch Dogs 2, let us start there.

A bit of backstory for Watch Dogs is needed. Due to a blackout in the Northeastern United States, the Blume Corporation builds a new Central Operating System (ctOS), that provides a way to have everything connected.

The open world of Watch Dogs is based on a fictionalized version of Chicago. The game allowed variety of neighborhoods that ranged from run-down areas to the most affluent. The game included iconic sights within Chicago. Some of these included the EL, the Sears Tower, and even Buckingham Fountain.

Within Watch Dogs, you play as “The Vigilante” also known as Aiden Pierce. Aiden was seen during a robbery of a Hotel, and since he ended up leaving during that robbery, a bounty is put on him. The hit man is instructed to take out his family, if necessary.

The hitman manages to accidentally kill Aiden Pearce’s niece Lena, so he is out to get revenge. That is where Watch Dogs starts.

Almost everything in Watch Dogs was “hackable”, meaning that you can use your phone to hack other individuals. When you did this, you could intercept a variety of things. These may include: money, chats, or even phone calls. The money would be the most helpful, but reading chat conversations or listening to phone calls could provide an entertaining insight into each pedestrian as they innocently go about their lives.

Similarly, this means that there are some objects within the world that are “hackable”. Some examples include cell phones, cars, city infrastructure, doors, and a number of other items.

With many first person shooter games, you are limited to the actions that you can perform. The same is true with Watch Dogs, but part of the gameplay of Watch Dogs that defines the Watch Dogs games is the fact that besides being an open-world, it is also a puzzle game.

In the first Watch Dogs there was an aspect to the game where you had to turn items to be able to activate other items. As an example, you would start with a power unit with lines In Watch Dogs, this was so prevalent that the “Peephole” achievement. These puzzles continue in Watch Dogs 2, however they are not nearly as common.

Watch Dogs 2 takes the success of Watch Dogs, and adds to it. In Watch Dogs 2, you play as Marcus Holloway, an Oakland-based hacker trying to get into Dedsec. In order to be initiated, Marcus, also known as Retr0, must go on a mission. This is the opening mission.

Watch Dogs introduced the original mechanism of using a cell phone to hack individuals. With the advancement of only a couple of years, Watch Dogs 2 has been able to add a few new mechanisms.

Watch Dogs 2 uses some of the technology is RC. The RC Car can jump, taunt and even drop weapons against enemies. The same can be said for the Drone. The Drone is needed for some levels, as well as some collectables.

One of the technologies that have become more ubiquitous since the original Watch Dogs is 3D Printing. In Watch Dogs, you could go into a gun shop to purchase weapons. However, with Watch Dogs 2, you can now use a 3D printer to print out, and even adorn, your weapon of choice. You can even do some side missions to be able to get different paint jobs for your weapons.

Another aspect to technology that has become quite common is the act of taking a selfie, or self-picture. This is doable within Watch Dogs 2, as is explained below. 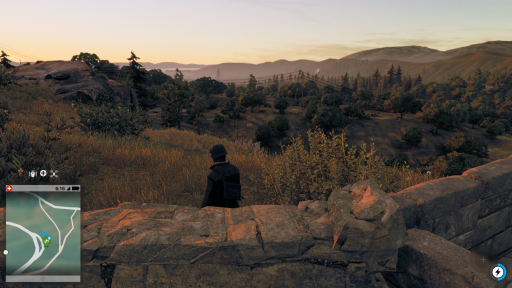 One of the side missions of almost any game is to collect things. In Watch Dogs, there was the “Peephole” achievement, mentioned above, where you would use hacking to peek into what others were doing to get an even richer sense of the gaming universe.

Watch Dogs 2 does have a similar side mission, but this is to get pictures of some of the iconic tourist sights in San Francisco. One of the twists with this, you can use the front-facing camera on your in-game phone to take pictures of yourself. Just like social media sites in life, characters will comment, in-game, on the pictures that you take.

The game world is not just confined to San Francisco, but encompasses the surrounding area. Some of these are Silicon Valley, Marin County, and Oakland. When you look at the map, it may seem small, but it really is not that small.

The scenery of San Francisco is spot on. Having never been there myself, it would seem like it is an accurate replication of what the San Francisco area is like. People who live in the Bay Area, or have visited enough, can verify or refute that statement.

As mentioned above, Watch Dogs 2 implements many of the same mechanisms as in Watch Dogs. You are still able to hack phones, cameras, cars, and city infrastructure. However, the mechanisms are expanded upon. For instance, there are now two additional items to help you in the game. The first is as remote control car. An RC car was introduced in the Watch Dogs expansion, Bad Blood. However, it plays an even more prominent role in Watch Dogs 2.

In Watch Dogs 2, the RC car is necessary, not only for being able to get to through certain missions, but also in order to avoid detection. There is another mechanism, a drone. The drone is used for simliar tasks. However, it can come in even handier than the RC car can.

Just like in Watch Dogs, you come across additional characters that will either help or hinder you along the way. A number of these individuals are hackers, and assist in some ways. While others are those out stop you.

The control scheme for Watch Dogs 2 is different than it was for Watch Dogs. After playing through Watch Dogs 2, and then going back and playing the first couple of missions of Watch Dogs again, it took some re-orientation to get back into using the proper controls. It is a minor thing, but something to be aware of.

After playing through the entire game. Some may think that the storyline is entirely implausible. Some aspects of it appear to be impractical. However, one thing that Watch Dogs 2 does, is make its own social commentary about not just humans, but also on technology and society as a whole.

Overall, Watch Dogs 2 is an improvement over Watch Dogs. The game play is good and the story, even with some quibbles, is pretty good. There is more to do in the game, from ATV racing, drone racing, or even grabbing bags of cash. There is plenty for all users to enjoy within the game. If you enjoy open-world games, and in particular, if you enjoyed Watch Dogs, then Watch Dogs 2 is worth getting.

Where would I like to see them go next? Maybe England, because ctOS is already, if not super close, to becoming a reality. Everything is being monitored there, so it would make for a possible candidate for future expansion.

Watch Dogs 2 is available on Xbox One, Playstation 4, and PC. Links below are to purchase the title from Amazon.

Here is an in-depth look at the new Call of Duty: Advanced Warfare’s Multiplayer.