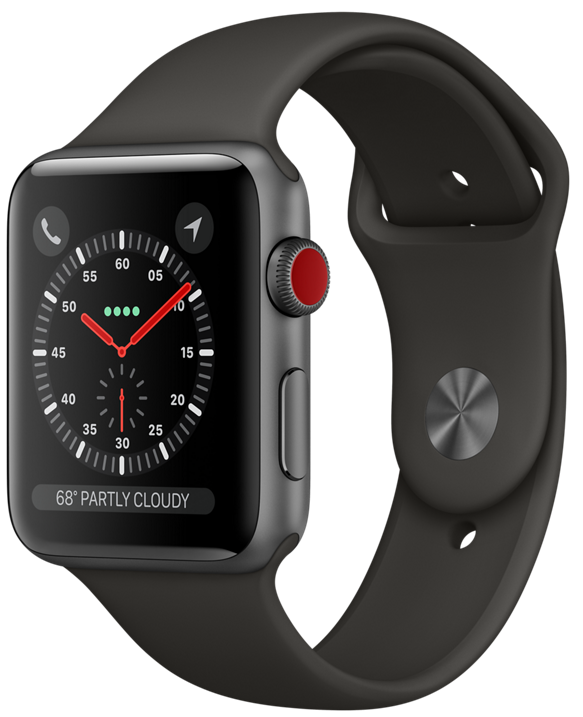 The Apple Watch Series 3 was just released on Friday. There were two models that were released, the GPS and the GPS + Cellular model. The GPS + Cellular model, also referred to as the LTE model, allows for an additional feature, the ability to answer phone calls and receive texts directly on your Apple Watch Series 3. This feature is called "NumberSync". It may have a different name for your carrier, but it is a simple descriptive name. The way the NumberSync works is that each device has its own line, which is part of the monthly cost that carriers charge. On the carrier end, your iPhone number is then forwarded to both your Apple Watch Series 3 as well as your iPhone. This feature requires carrier support since the switching has to be done on the carrier side. With that information, let us look at an issue I had setting up the feature.

As it seems to be the case for me this year, I had issue with setting up the the cellular connectivity on my Apple Watch Series 3. You can see my post about the issues I had with cellular on my iPad Pro. During the setup process of the Apple Watch Series 3 with LTE, you are prompted to configure a cellular connection. You can, of course, set it up later as well. When I attempted to setup cellular, I got the following error message: 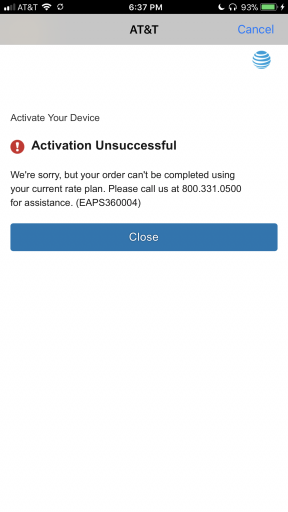 The error message states: "We're sorry, but your order can't be completed using your current rate plan. Please call us at 800.331.0500 for assistance. (EAPS460004)" So I called AT&T's customer service and talked to a tech, they tried a few different things and none of it worked. At one point, he indicated there was a "magic number" that had to be added to the account to allow the activation. I do not think he had any clue what he was talking about. At his request, I then again tried to setup cellular on my Apple Watch; to no avail. He then determined that it was an activation issue, and proceeded to give me a number to call. I called the activation line and talked to another rep, she said I had to go to a store to get the issue fixed, because they had access to things that she did not. We will circle back to this in a little bit. This was about 20 minutes before my local corporate AT&T store closed, so I went to the AT&T reseller store that is also nearby.

At the AT&T reseller store, I talked to the representative there. She understood what the issue was and knew that a new line had to be added. One of the downsides of an AT&T reseller is that they cannot always perform certain actions that need to be done. When this occurs it requires a call to an internal AT&T number. So the reseller rep called the activation line to get some help activating the line. Which brings us back to my call to the activation line. If the AT&T reseller rep had to call AT&T, then why is it that the activation rep that I called could not assist me? That one bugs me. Once the new wearable line was added, the "Setup Cellular" had a different display. The one below. 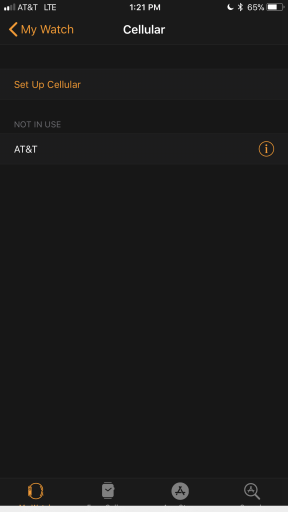 Okay, so that is progress. So the Apple Watch app on my iPhone at least saw that there was a line that could be used. I again attempted to setup cellular, but received yet another error message, the one below. 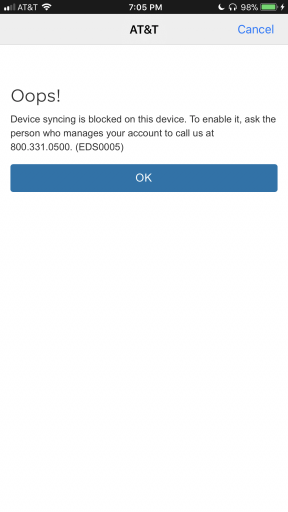 The error reads "Device Syncing is blocked on this device. To enable it, ask the person who manages your account to call us at 800.331.0500. (EDS0005)". That seems like a straight forward one to fix and a call to AT&T customer support should help fix it. The AT&T reseller rep called AT&T support line back, and they said everything looked good and that it could be because the terms and conditions were not accepted. So there was another number for that, we called that one and the automated system indicated that the terms and conditions were accepted. Another attempt to configure cellular resulted in the same error message. I decided to call AT&T's support line back from the AT&T reseller store at about 8:40pm. I was on hold for about 25 minutes and the AT&T reseller store was closing, so I talked to another AT&T support rep, for about 25 minutes in my car about the issue. He suggested restoring the Apple Watch and setting up again, which I was reluctant to do and he indicated that there was a known issue and to wait for the fix. The issue that he was referring to was a wifi issue, not a cellular one.

I hung up with the AT&T customer service rep and drove home. I then attempted to restore the watch and try setting up cellular again. That did not work, so I gave up for the evening. I opted to go to the AT&T corporate store, since the issue, at least to me, seemed to be an AT&T one, and nothing with the watch. I worked with an AT&T rep at the corporate store and eventually we figured out the issue.

The AT&T corporate rep began looking at resetting passwords to allow the "primary" account to login to the "MY AT&T" app. The AT&T corporate thought this was the issue because this is how the Android-based Smart Watches needed to be configured. During his testing he was looking at the line for the Apple Watch to find the NumberSync feature, but he could not find it there. It could not be found under the Apple Watch line because the NumberSync feature is under the line for the iPhone. The item that was blocking setup was that a feature called "NumberSync blocking for Apple" had been added to my iPhone line. I do not know when this was added, and I certainly do not remember adding it. Once this was removed as a "feature", I was able to proceed with the cellular setup.

After removing it, I received this email in my inbox.

It took 19 hours, a half dozen phone calls to AT&T, totaling up to two hours on the phone, and over 90 minutes in different AT&T stores just to get the issue resolved. Ultimately it was fixed, but it would have been nice to have an AT&T phone customer support rep realize that it was a NumberSync issue after first calling, that way it would have been done and out of the way sooner. If you find yourself in the same boat, I hope this fixes the issue for you.