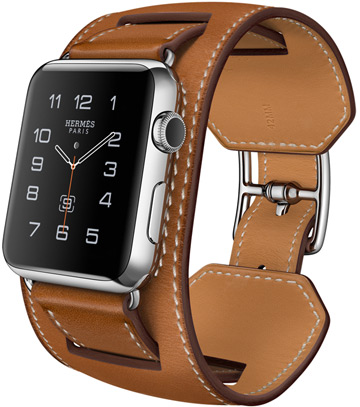 The leather bands that are part of the the Hermes collection are one of three styles. Cuff, Tour, or Double Tour. The Cuff band only comes in the 42mm size. The Cuff has been customized to allow the heart rate sensors to remain in contact with the skin. The Cuff will cost $1500. 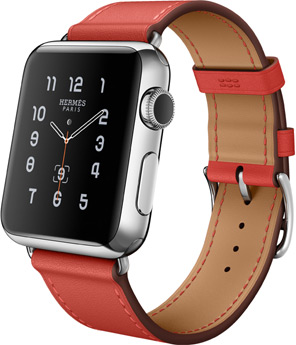 The Tour band comes in both 38mm and 42mm varieties. The Single Tour comes in three colors. The first is a brown leather. The second is a Noir leather. The Noir leather is black in color. The last color is only available in 38mm and is the Cupcake Leather band. It’s a bright red band. The single Tour has a double-clasp and looks similar to a classic leather band.

Similarly, the Double Tour comes in a variety of colors, but only in the 38mm variety. The four bands are Fauve Barenia Leather, Etain Leather, Capucine Leather, and Bleau Jean leather. These four colors are brown, gray, red, and blue. The difference between a Single Tour and a Double Tour is that the Double Tour is designed to wrap around a wrist twice, with part of the band being off to one side as to not obstruct the heart rate sensor.

The collection is not the only addition to the Apple Watch family. Apple also added a couple of new colors. The colors Rose Gold and Yellow gold. These are both aluminum, but have a new finish. The availability of these is today, starting at $349 for the 38mm and $399 for the 42mm. 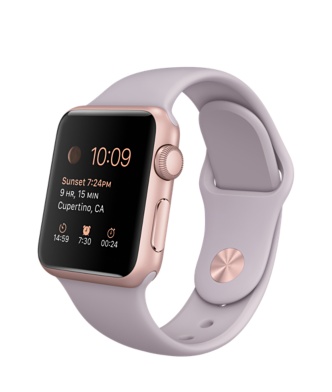 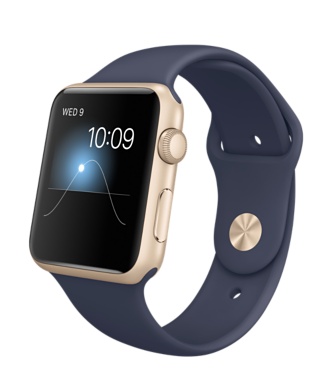 The last change that Apple made is to add some additional band colors. The new sports band are lavender, antique white, stone and midnight blue, as well as new (PRODUCT)Red sports band. The Apple Watch Sport silver aluminum is also now available with new orange or blue Sport Bands.

The stainless steel Apple Watch also received a new option, the Black model can now be ordered with a black sports band.

The addition of the Rose Gold and Yellow Gold aluminum Apple Watches are a nice change. The addition of a new collection may just be signaling the beginning of how Apple will expand its Apple Watch to appeal to more individuals.

One of the things that Apple has done over the last five and a half years since the introduction of the original iPad in 2010 has been have a new release of an iPad just about every year. The original iPad had a 9.7-inch screen, and Apple introduced a new screen size, a 7.9-inch when they introduced the iPad Mini in October of 2012. Well, today Apple has introduced a third screen size for the iPad, 12.9-inches. This screen is on the iPad Pro. 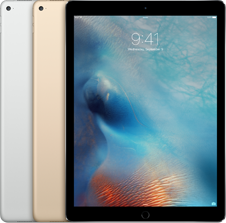 The iPad Pro, as stated sports a 12.9-inch display that is 2732 pixels by 2048 pixels. The 2048 pixels is the same size as the landscape orientation of the iPad Air 2. The iPad Pro also comes with an A9X processor that has a built-in M9 motion co-processor. The iPad Pro has dual microphones, which is also the same on the iPhone 6 and iPhone 6 Plus. Yet, the iPad Pro has one feature that is not available on other iOS devices, four speakers. Sound coming out of the four speakers will automatically change based upon the orientation of the iPad Pro. The iPad Pro also comes with a Touch ID Sensor, up and down volume control and even a 3.5mm headphone jack. There is a new connector for the iPad Pro, the Smart Connector. The Smart Connector does not replace the lighting adapter but is a new connector that allows bi-directional data and power to any compatible devices. The Smart Connector will allow 3rd party devices.

There are a couple of accessories specifically for the iPad Pro. The first one adds some benefits of the device. The accessory is a stylus, called the Apple Pencil. 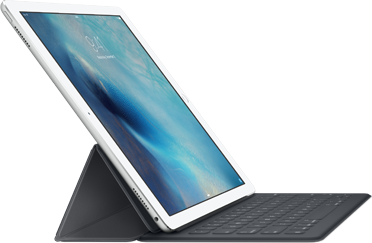 There has been no change to the 9.7-inch iPad Air line. It remains the same as it was before the keynote.

Apple made a couple other product releases that Apple has done today. Given how long the keynote was the remaining updates will be covered in another story tomorrow.