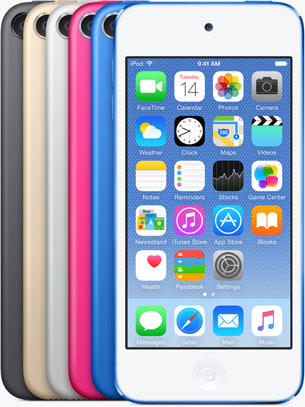 The last updates for the iPod Touch was back in September of 2012. There was a slight update that added a 16GB model, but there were no major component upgrades with that release. The iPod Touches also received a slew of color updates. These colors were Black, Gray, Pink, Red, Yellow, Green, and Blue.

The Six Generation iPod Touch has a few new specifications. It now sports an A8 processor, this is the same as the iPhone 6 and iPhone 6 Plus. It also sports an 8MP iSight camera. The 8MP camera is similar to the 8MP iSight Camera that is in the iPhone 6. There are a couple of minor changes, the iPod Touch only has a f/2.4 aperture, which is slightly less than the f/2.2 that is iPhone 6, but it does allow for timer control. The iPod Touch also allows for Slo-mo video capture at 120 frames per seconds as well as 1080p HD video recording at 30 frames per second.

Along with the updated processor and camera comes the M8 co-processor. This is the same co-processor in the iPhone 6 and iPhone 6 Plus. The M8 is used to track motion of the iPod Touch, including elevation and motion.

There are two other upgrades to the hardware. These include 802.11AC Wifi which is upwards of six times faster than the 802.11N that was in the 5th Generation iPod Touch. The 6th Generation iPod touch also includes Bluetooth 4.1.

There is one item removed from this version of the iPod Touch. The loop feature, which was introduced in the last generation, is now gone. 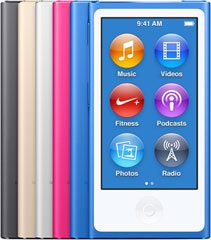 The new iPod Nanos are very similar to the previous model. The only noticeable change is colors. The colors are Space Grey, Silver, Gold, Pink, Blue, and (Product)Red. The remaining specifications are unchanged. The iPod Nano still sports the same 2.5″ Multi-touch display, has a standard size of 16GB and is $149. You can order an iPod Nano today.

As with the iPod Touch and iPod Nano, the iPod shuffle was last updated in September of 2012 with the 4th Generation. The 4th Generation iPod Shuffle changed the form factor from what looked like a pack of gum to a square with a clip. The shuffle also came in the same selection of new colors as the other iPod models; Black, Gray, Pink, Red, Yellow, Green, and Blue.

Similar to the iPod Nano, the iPod Shuffle has only received a minor update. The update is the colors. They are the same colors as the iPod Touch and iPod Nano. The colors are Space Grey, Silver, Gold, Pink, Blue, and (Product)Red. The price has remained unchanged at $49. The new iPod Shuffle is available now.