A couple weeks ago I made an appointment at Apple to get the screen on my iPhone 7 Plus replaced. While I was there waiting to pickup the iPhone I went to take a peak at the iMac Pro that was on display, which looks fantastic in all of its Space Gray glory. After looking at the iMac Pro I wandered over to the Apple Watch bands. Now, I am not one who will go with an ostentatious or bright colored watch band, it is just not my style. Instead I tend to stick to more muted colors. I did decide to pickup the Black Sport Loop band.

The Black Apple Watch Sport Loop band is not entirely black. Actually it is a multi-colored band which has black surrounding it. A cursory glance would say otherwise, but if you look closer you will see a variety of colors. Some of the colors that can be seen are orange, blue, and red. Even with this the band still appears black. 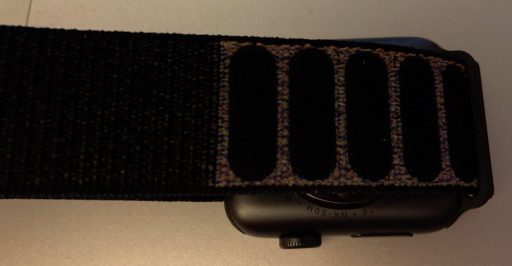 After using the same Apple Watch band for more than two and a half years, you become accustom to how it feels. Getting accustom to the Sport Loop band took very little time. In fact, it is actually lighter, in terms of weight, than the Sport Band. Which is quite nice.

As with the Sport Band, the Sport Loops can be used with the clasp coming from the top of the watch or the bottom of the watch, which allows for use on either wrist, but it also allows you to determine the best placement for the clasp.

There is one thing that the Sport Loop does that the Sport Band does not, but it not necessarily a good thing. The Sport Loop can retain a small bit of water. It will eventually dry out, but it can be awkward if you place your wrist on your clothing after washing your hands and the water seeps out. Despite the Sport Loop retaining water, it does not affect the ability for the Sport Loop to stay secured. This is good for those who enjoy going swimming and have the Sport Loop on their Apple Watch.

The biggest question I have regarding Apple’s upcoming AirPower mat, is how well with sport loops bands charge on the mat? Will they charge at all? In order get them to charge will we need to remove one of the ends of the band from the Apple Watch in order to have it be placed close enough to be charge wirelessly?

We do not know the answer to these questions, but it is a concern with the loop bands. The only other band that might have some concern is the link bracelet, much for the same reason because it cannot lie flat enough to be charged.

The Sport Loop is a good Apple Watch band. The hook and loop enclosure mechanism that is used by the Sport Loop stays secure regardless of it being water logged or not, which is a definite plus. Despite its name the Black Sport Loop does contains small hints of color within the band, which is a nice accent and unless you are looking closer it is hardly noticeable. I have not decided whether I prefer the Sport Band or the Sport Loop. It is unlikely that I will be swapping out the watch bands anytime soon. If you are in the market for a new Apple Watch band, take a look at the Sport Loop, it may be a good choice for you.