Even though there is no mention for the reason, the all-online format is somewhat better for all developers because everyone can see the exact same sessions as the same time and there is no lottery for tickets, no rushing to be the first, and just like WWDC20, this is a free conference which provides more accessibility for all developers to attend. Everyone can see the same conference no matter where in the world they are.

Some of the requirements for the application are:

To be eligible for the Challenge, you must:

Apple will be releasing more information in the next couple of months. As has become my tradition, I will be making predictions of what we might see at WWDC once it is closer to the start of WWDC.

It is likely that you are aware that there is an international pandemic known as Covid-19. The highly transmissible virus is a problem and in order to minimize the spread, it is best to avoid large gatherings where transmission is possible.

In order to avoid having anyone contract the virus with 5,000 developers gathering in one place, Apple is changing the format of this year’s WorldWide Developer Conference (WWDC) to an online format. For a vast majority of Apple’s 23 million registered developers experience Apple’s WWDC in an online-only format. In fact, the number of developer who can actually attend WWDC is 0.022% of all developers.

“The current health situation has required that we create a new WWDC 2020 format that delivers a full program with an online keynote and sessions, offering a great learning experience for our entire developer community, all around the world. We will be sharing all of the details in the weeks ahead.”

One of the downsides to moving to an online format is the fact that San Jose, where WWDC has been held the last few years, will lose out on a significant amount of revenue because of the conference. In order to help San Jose, Apple is going to provide $1 million to San Jose organizations to help offset the loss.

My prediction is that next year’s WWDC will return to an in-person conference, although some of the changes made this year will still be incorporated into next year’s conference. I hope to be able to watch the keynote in June, but either way I will be writing a post about what Apple announces. It will be interesting to see how this year’s WWDC goes.

There is a change that cannot be expressed in words. To quote from Apple’s press release,

The 16-inch MacBook Pro introduces a completely redesigned six-speaker, high-fidelity sound system designed to bring musicians, podcasters and video editors the most advanced audio experience ever in a notebook. New Apple-patented force-canceling woofers use dual opposed speaker drivers to reduce unwanted vibrations that distort sound. As a result, music sounds more clear and natural than ever before, and the bass can go half an octave deeper. An upgraded high-performance mic array delivers a 40 percent reduction in hiss and an improved signal-to-noise ratio that rivals that of popular professional-grade digital microphones, delivering super-clean recordings that capture even the quietest details.

One of the biggest, and most needed, changes is the keyboard. The old style keyboard which was introduced in 2016 has been replaced with a Magic Keyboard. The mechanism that you type on was previously a butterfly switches. This has been replaced with the traditional scissor switches. This change should reduce the overall issues that have affected the keyboards, but only time will be able to tell if that is really the case.

The keyboard has two additional features that many users have been asking for. The first is a physical escape key. Many developers will be glad to see this key return, as they are constantly using it. The second keyboard feature that many users have wanted is the “inverted t” arrangement for the arrow keys. The return of inverted-t arrangement will allow users to easily identify which key they are pressing.

These are configurable to a 2.4GHz 8-core Intel Core i9 processor and an AMD Radeon Pro 5500M with either 4GB or 8GB of memory. The possibilities for upgrading the storage have increased as well. You now have the options of a1TB, 2TB, 4TB, or 8TB SSD.

There have been some reviews of the new 16-inch MacBook Pro. Most notably from Marco Arment, John Gruber, and Rene Ritchie. There is one last thing, Jonathan Morrison was able to sit down with Apple’s Senior Vice President of Marketing, Phil Schiller to discuss the MacBook Pro.

It is good to see Apple providing the features that their professional users want in devices. Hopefully, this is just the first step in making their laptops even better.

I am not sure if I will end up getting one at some point or not. My early-2015 MacBook Pro is still working, but is limited in terms of storage space, time will tell. If I do end up getting one, I will be sure to review it.

Today Apple sent out invites to members of the press announcing an event on October 30th. The event will not be held at the Howard Gilman Opera House on the campus of the Brooklyn Academy of Music in New York City. The event titled “There’s more in the making” will be at 10:00 AM Eastern time on October 30th.

The event will be live streamed and can be watched at the Apple Events page.

Apple has done something a bit different with the invitations this go around. They sent out different images to different journalists. The header image above are the ones that are shown on the events page. However, some journalists got even different ones, like the one below. 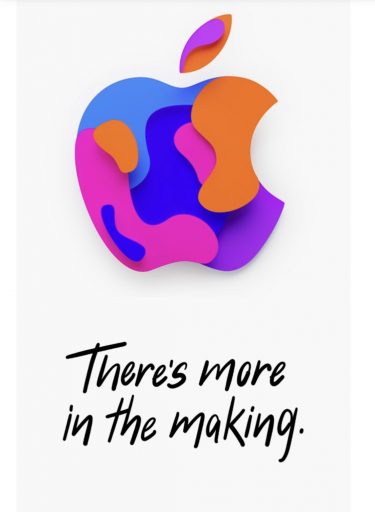 These are not in the rotation of images on the event page. It is good to see the variety of invites that were sent out. Look for my predictions sometime before the event.

As has been the case since 2012 Apple has been holding its iPhone event in September. This year is no exception. Today Apple has sent out invitations for their September Event. This year’s event is on September 12th. It will be held at the Steve Jobs Theater at Apple Campus 2. As with most Apple events, this one is at 10 a.m. Pacific Time. It will be streamed, so you can watch it live.

I will be posting my predictions for what we might see sometime closer to the event date, so stay tuned. 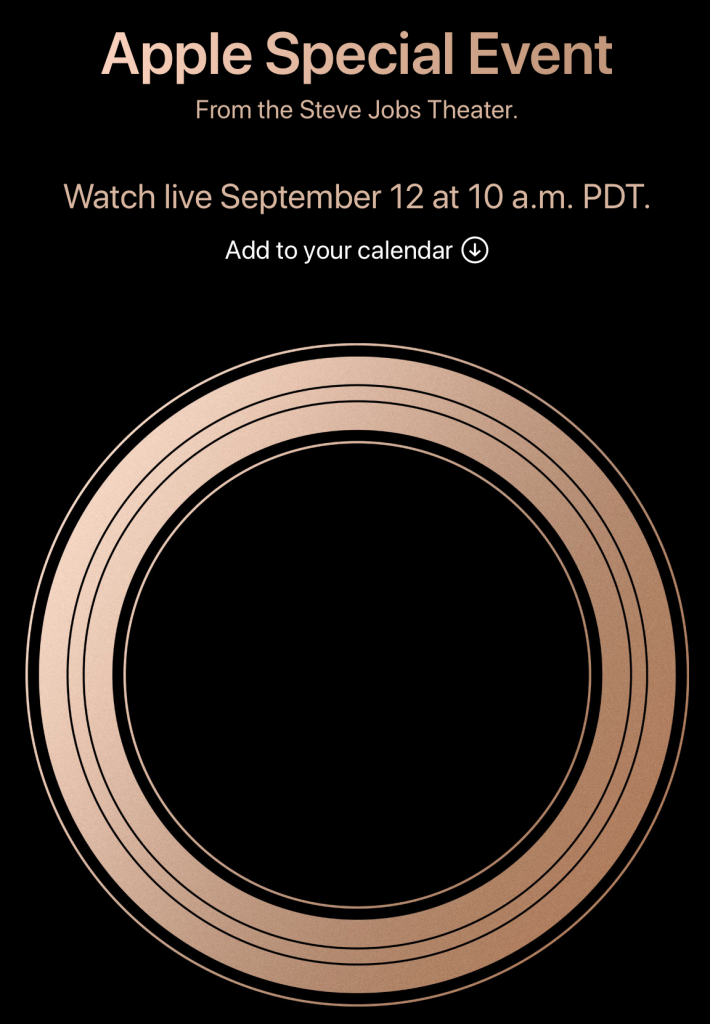