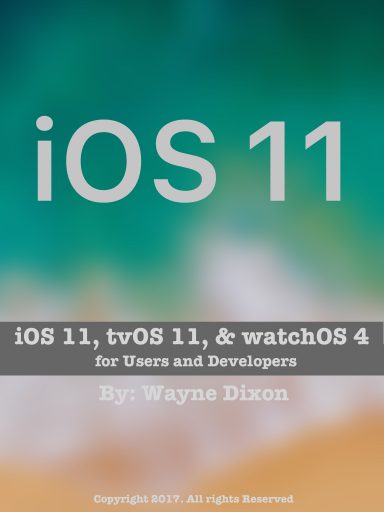 iOS 11, tvOS 11, and watchOS 4 for Users and Developers covers all of the new features for each platform. On iOS this includes history of the iPhone, iOS 10.1 to iOS 10.3, 32-bit apps, the redesigned lock screen, home screen, and new cover sheet. Other topics include the all new Files app, control center, changes to Siri, the App Store, updates to Messages, Notes, Camera,  the Music app, and Photos, along with many other changes

A primary topic is the iPad, specifically multitasking, the Dock, Drag and Drop, and how iOS 11 brings a whole slew of new iPad-specific features to the forefront.

For developers some of the topics include changes to Swift, Xcode 9 changes included the Code Editor Window, Source Control, Colors, and developing on iOS. Other topics include APFS, AirPlay 2, Metal 2, CoreML, and networking changes.

iOS 11, tvOS 11, and watchOS 4 for Users and Developers has something for all types of users, whatever your primary interest lies in iOS, watchOS, or tvOS.

It is available from Apple in either iBooks, or ePub format. It is $3.99. You can pre-order the kindle version from Amazon for $4.99.