Here’s the 1984 introduction video for the Mac

Today Apple announced a whole slew of new products. The iPad Air and a refresh of the iPad Mini with a Retina Display. As well as new 13” and 15” MacBook Pros, running Haswell and Crystalwell respectively. While the new Mac Pros were unveiled at their World Wide Developer Conference (WWDC) 2013 event, we received update information, better information on specs and a release date.

I could rehash all of the specs for the new devices, but I want to focus on Apps instead. We will start with OS X 10.9 Mavericks. OS X 10.9 Mavericks was unveiled to the world at WWDC 2013. Some of the new features were covered, the biggest item left out was the price and availability date. Today we learned that. Mavericks is a FREE Upgrade for those running OS X 10.6.8 Snow Leopard, Mac OS X 10.7 Lion, or OS X 10.8 Mountain Lion. Yes, you read that correctly, it is FREE. You can read all about the OS X 10.9 Mavericks upgrade by purchasing my ebook review from iTunes in ePub or iBooks versions for $2.99. The price of OS X 10.9 Mavericks is the important thing to note. Apple not released OS X 10.9 Mavericks, but also released some other applications today too.

Apple has unveiled completely refreshed versions of their iLife and iWork applications. These updates have been completely redesigned for OS X 10.9 Mavericks and iOS 7. It now makes completely sense as to why Apple did not release updated versions of Garageband, iPhoto, and iMovie on the iLife side and Pages, Keynote and Numbers, on the iWork side, at iOS at last month’s iPhone announcement. It was to be done in conjunction with OS X 10.9 Mavericks’ release. Let us look at each of the apps in turn. We’ll start with iLife.

iLife has been the demo software of choice when showing off just how well a Mac runs and also demonstrates what is possible with a Mac. Not to mention that the iLife Suite makes it much easier to be creative on a Mac.

Garageband received a big update. Garageband is now completely 64-bit on iOS and OS X. Garageband now has the ability to handle up to 32 Tracks simultaneously. That is 32 tracks on any 64-bit device, iPhone, iPad Mini with Retina, iPad Air or OS X Mavericks machine. That was not the only update. Garageband also has a new feature called “Drummer Track”. Drummer Track will allow you to have a track that will play a drumbeat in your song. You have the ability to change which portion of the drum set the player is playing on, the tempo of the drumming and even what type of feel the drummer will bring to your song. This feature is available on all iOS and OS X 10.9 Mavericks devices.

iPhoto has always been a big application for users who take a lot of photos. With easy editing, organization and sharing, iPhoto is a no brainer for just about anybody. iPhoto is a getting a brand new look. Everything is now contextual. This means that if you’re editing a photo you will see only items that are related to the photo. The same goes for sharing as well. With iPhoto you are now able to select a group of photos and iPhoto will create a montage of the photos to fit best for displaying.

With iPhoto you also have an option to have a book printed of your photos. This has been around for a while, but in iPhoto this is made even simpler.

iMovie is gaining a couple of new features, most notably the ability to change the speed of a section of a movie. This, paired with the new iPhone 5S, means that when you take slow-motion video, it can be shown in spectacular beauty without much effort.

Under previous versions of iMovie sharing just a section of a video could be a bit of a pain. Now with the updated iPhoto, users are able to highlight just the section they want and share that to whatever service they may want. It could be Facebook, YouTube, Vimeo or others.

iWork has always been a must-have productivity suite for many users. The biggest downside has been that Apple has not provided a significant update to the iWork Suite since 2009. Today, that has changed.

Pages has received a significant update. Pages now does everything contextually, or as Apple calls it, “object-based” . If you are adding a picture, you will see items related to pictures. If you are changing a selection of text, you will see bold, underline, and italics along with fonts. This is the case for both iOS and OS X.

Keynote, like Pages, has received and update. With Keynote you are presented with more transitions, more realistic physics. Apple has added a few more transitions to allow presenters to choose the best transitions for their presentation.

Numbers, just like Keynote and Pages, has received a big upgrade. Numbers follows the same path as Keynote and Pages with it’s contextual options. If you are editing a chart, you’ll be presented with options for adding formulas, changing fonts, colors, and text. If you are editing a graph, you will be able to swap the chart on the fly, add a title or legend, and even change colors with a few clicks.

There is one other aspect to the iWork applications and iCloud. A new feature with iWork is collaboration. Collaboration works just as anybody would expect it to work. You can have multiple people simultaneously working on the same document. The changes are almost instantaneous. iWork for iCloud is not limited to just those with OS X 10.9 Mavericks machines. You can edit iWork documents with those on Windows PCs as well as OS X 10.9 Mavericks machines. There are some limitations for Windows PCs. For instance, if you’re using Pages and need to collaborate with a colleague who is on Windows Vista (or higher) and running Windows 7 with Internet Explorer 9, you will be collaborate in real-time without any issues. iWork for iCloud supports Safari 6.0.3 or newer, Chrome 27 or newer, and Internet Explorer 9.0.8 or later. When using Internet Explorer there may be some issues.

iCloud is heavily integrated in all of the iLife and iWork Applications. With iLife and iWork all of your files become instantly available on all of your devices. This will allow users to create, modify and save on ANY of their devices. You can start creating a Pages document on your iPad and continue editing on your Mac running OS X 10.9 Mavericks. A side effect, and full benefit, of this means that iLife and iWork on iOS are using the exact same file format as on OS X. No more wondering “does this font work on my iPad”, or “What will this presentation look like when I try to start it”. The files are all the same, no more confusion or guess work is needed.

This model has turned the entire computer industry. Instead of focusing on charging users for a license for software, Apple is looking to use the margins on their hardware to subsidize the software portion of their business. The software, in turn, will bring more people into the Mac and iOS communities, which means they will buy hardware and thus creates a nice cycle for Apple and its shareholders.

This model is also a direct shot at Microsoft, who is known to charge at least $99 per year to use their Microsoft Office 365 software suite, and even more for retail boxed copies of the software.

Apple also made mention that over 20 of their applications will be receiving updates similar to those for iLife and iWork. This means full 64-bit compatibility for both iOS 7 and OS X applications. Some of these applications include Podcasts on iOS, Aperture on OS X, If we include the three iLife and three iWork apps, this means that there are still some additional applications that will be updated. So keep your eyes peeled for this.

Overall, Apple has delivered some rather solid updates. The price change for all of their iLife, iWork and OS X 10.9 Mavericks client becoming free makes a very compelling argument for why anybody would choose to use anything other than Apple products. It will be interesting to watch the response by other companies to this shift in strategy. 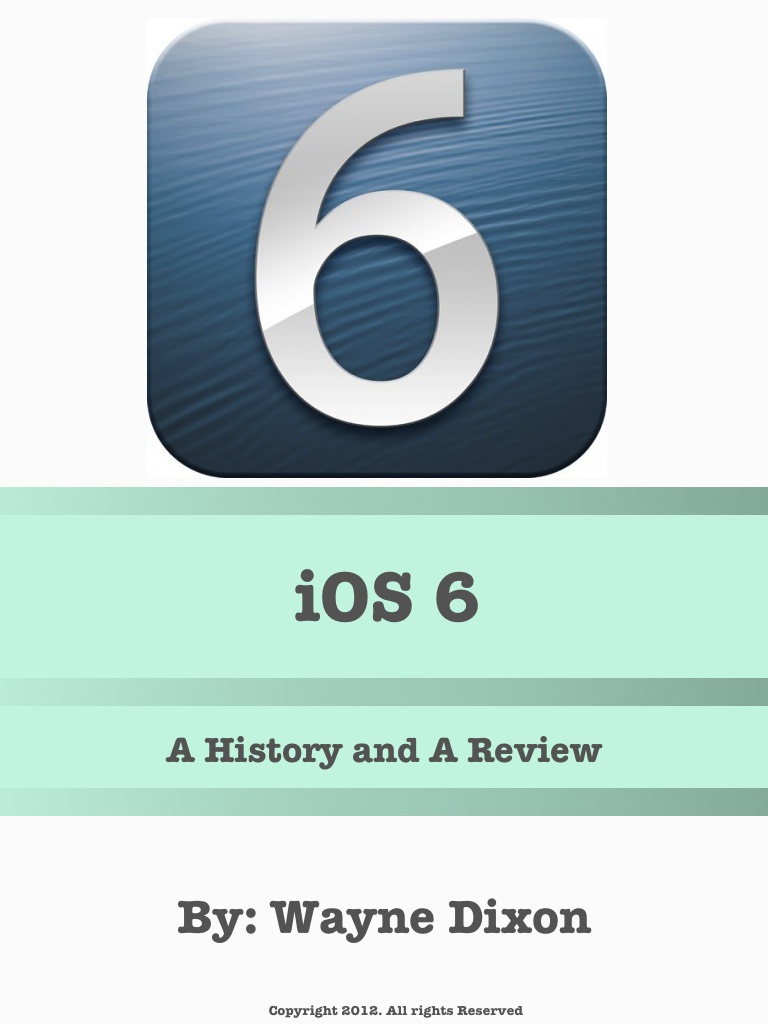 Some may wonder why I have written another long review so soon after the last one. One reason, because I could.

Some readers don’t have a Mac and may not have been as interested in OS X Mountain Lion as users who have iPhone, iPads and iPod Touches. My new review is for iOS 6. It includes a history of iOS through iOS 5.1. The review also includes iOS 6. Some of the new features of iOS 6 include Apple’s Maps, Passbook, along with redesigned App Stores.

You can Pre-order the iBooks version from Apple. It will be released on September 19th, 2012. The Kindle version will be available soon. 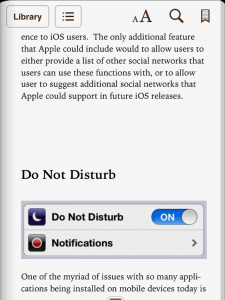 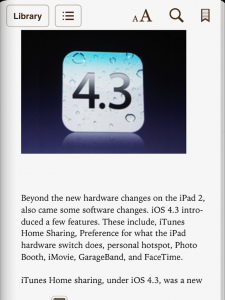 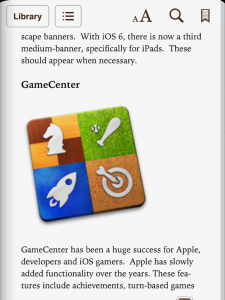