A Review of the Apple Watch Series 8 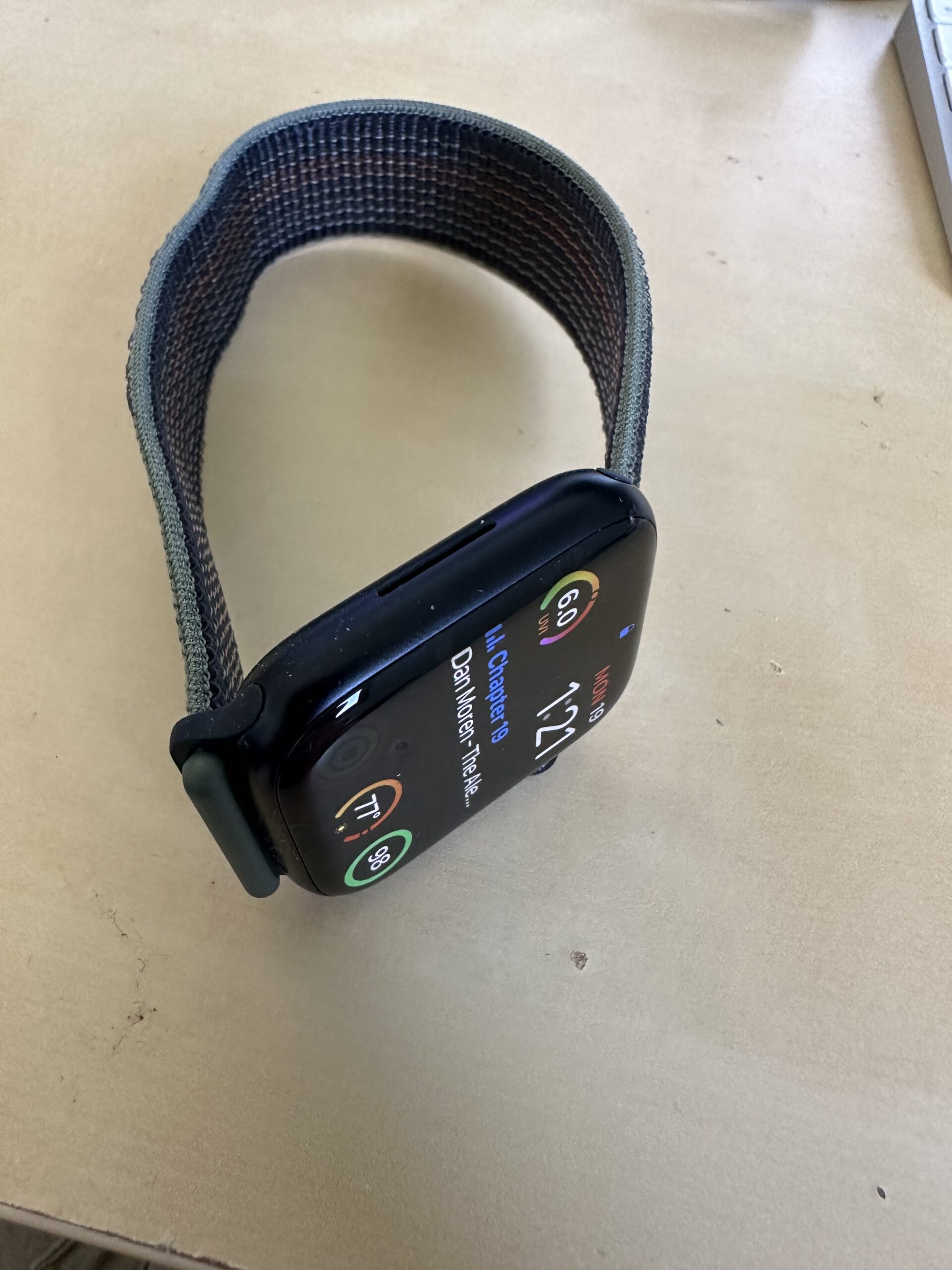 The Apple Watch is now a pretty mature product and it has come into its own, in terms of finding its primary use cases. The biggest uses for the Apple Watch are for fitness and health. The reason for this is that the Apple Watch is almost always on ones wrist throughout the day, including when someone is sleeping.

With the Apple Watch being a mature product, it does not get nearly as many hardware advances as one might expect. However, there are a couple of new features for this year’s Apple Watch Series 8. Before we dive into those, let us quickly cover my pre-order experience.

Apple held their “Far Out” event on September 7th and Apple Watch pre-orders were available that afternoon after the event had concluded. Once orders were available, I ordered a 45mm Aluminum Series 8 in Midnight with a Midnight Sport Loop band. Due to my choice of band, the only option I had was delivery. If I had gone with another band, like the Storm Blue, I could have picked it up at my local Apple Store. However, delivery was fine with me since Fedex and UPS do not deliver until the afternoon, at least for me. 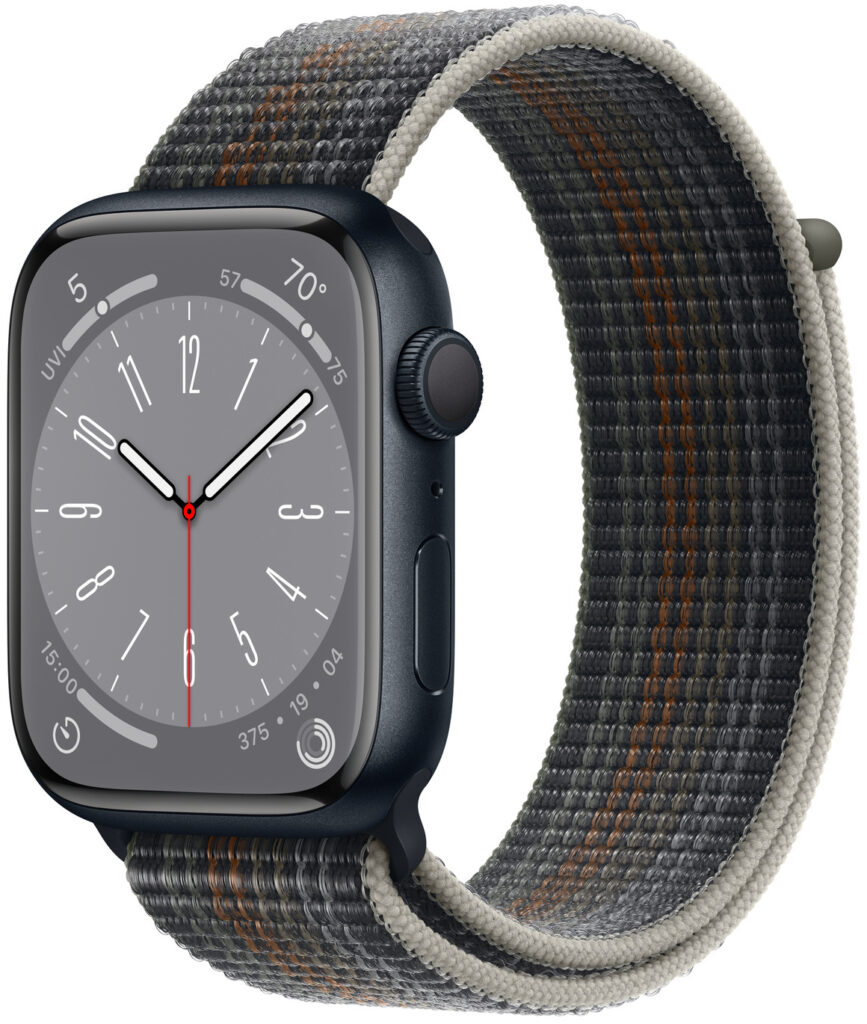 Last year when they introduced the Apple Watch Series 7 they introduced a new color, "Midnight". Midnight replaced the standard "Space Gray" or "Black". Midnight is not a pure-black, but more of a really dark blue. Typically when Apple releases an Apple Watch they have a corresponding set of bands to go with it, however, they did not do that last year. This year though they have released a new Midnight Sport Loop as well as a Midnight Solo Loop.

The Midnight Watch is the same shade as the Series 7 Midnight color. As mentioned above, the Midnight Sport Loop is a new band. The Midnight Sport Loop has alternating stripes of colors. One side is green, while the other is a light gray. There are stripes of blue, green, orange, and gray throughout the band. It was the most subtle band that Apple offered, hence the reason why I chose it when I did my pre-order. 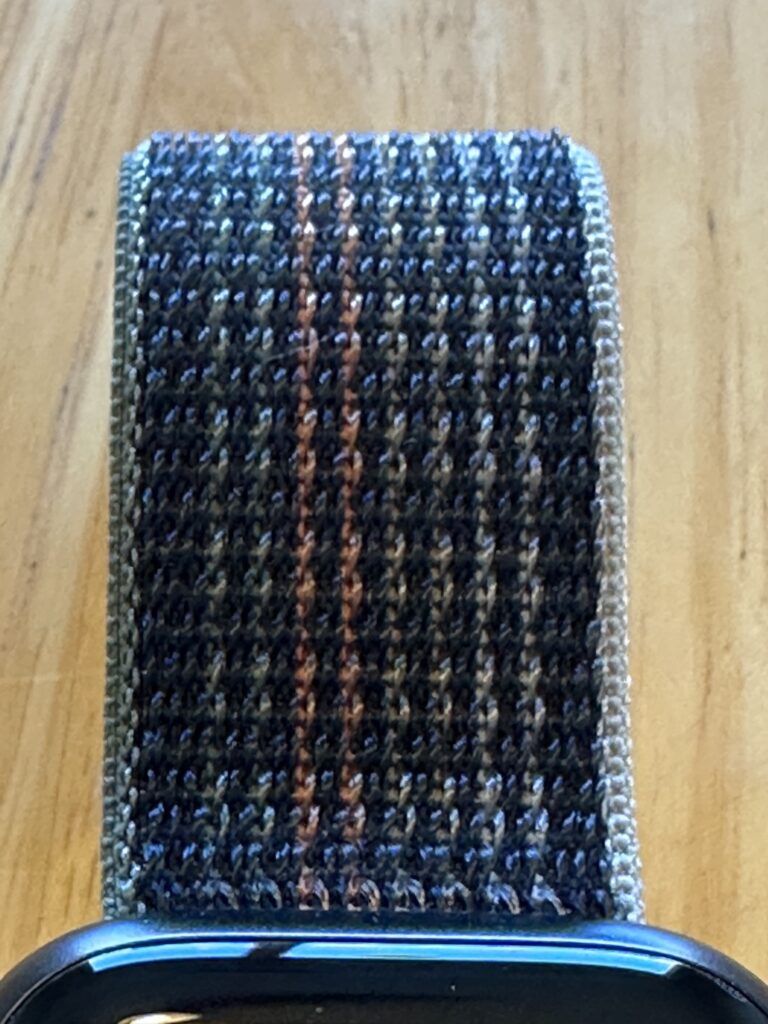 What I would really like is a color-matched Solo Loop because even the Black Solo Loop is not as dark as Midnight Apple Watch. Now, that we have covered the color and bands, let us look at a couple of new features for the Series 8, Crash Detection, and the Temperature Sensor.

One thing that everyone hopes to not be involved in is a crash. However, should a crash occur the Apple Watch Series 8 has the ability to detect when you are in a crash. This is done using the new accelerometer and gyroscope, along with algorithms for crash detection. The new accelerometer can handle up to 256Gs of force, which is way beyond what a human can withstand. If you are in a crash, the Apple Watch can contact emergency services, and your emergency contacts. The Watch will do so if you do not cancel out of the SOS emergency call.

Back in 2016 there were reports about Apple doing testing in an area and there were complaints of excessive engine noise from neighbors near the facility. I am now thinking that some of that noise could have been testing of the Apple Watch, and iPhone 14, Crash Detection algorithms. If it was not that, it could have been testing to obtain data for the algorithms. This is pure speculation on my part, but the crash detection does make some sense. Features like this are not created in just a few days, but they do take significant testing and tweaking to get correct.

Let us turn to another new hardware feature, the Temperature Sensor.

The Apple Watch is designed with health tracking in mind. This includes fitness, mindfulness, and even sleep tracking. One area that can be health related is cycle tracking. Cycle Tracking was added to watchOS 6 in 2019. The Cycle Tracking features would allow women to track their menstrual cycle and record various aspects, like how much bleeding, any factors like being pregnant, lactating, or using contraceptives, or any other symptoms that they might be experiencing.

One area that the Apple Watch has not been able to help with is temperature. That changes with the Series 8 Apple Watch, because there is a whole new temperature sensor. 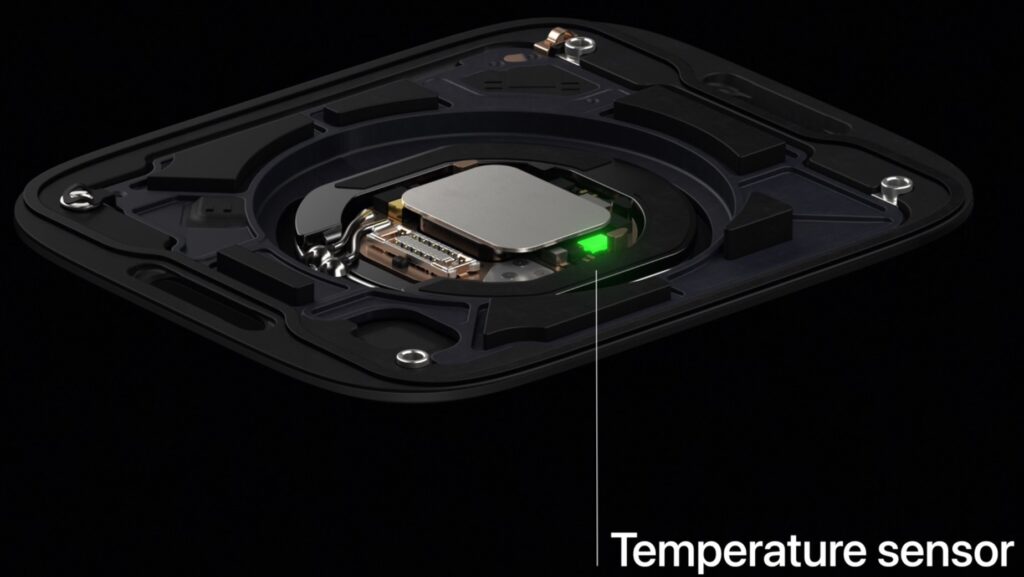 The temperature sensor on the Series 8 Apple Watch is designed to provide you with a baseline measurement and not the actual temperature. This information can be used to provide you with some possible insight into when you might have ovulated. This can help you with being able to assist you in possibly becoming pregnant. This is not a predictive feature, but a retroactive one. The feature is called "Retrospective Ovulation" and can only provide you with information about when you might have ovulated. It does not predict when you will ovulate. One thing to note about retrospective ovulation is that according to Apple, “retrospective ovulation estimates should be available after about two cycles.”

That covers all of the new features that are for the Apple Watch Series 8 itself, but let us cover a couple of new features for watchOS 9 that are worth noting. These features are the new Compass app, Low Power Mode, and some notes about the Nike Apple Watch.

The Apple Watch has a had a compass feature ever since the original Apple Watch was released in April of 2015. Its functionality has been fairly basic with just providing a digital version of an analog compass. For many people this is enough, but watchOS 9 brings some enhancements to the Compass app.

The Compass app has a new feature, called Backtrack. Backtrack is a way of being able to mark different points along a route so that you can make your way back, should you find yourself in a situation where you get off course.

While this feature is primarily designed to help you when you are out in the wilderness, it could be useful in any situation where you might not be able to find your way back to a place. Some possible examples could be if you are out on a hike, but it could also be just as useful in a new city and you need assistance making your way back. 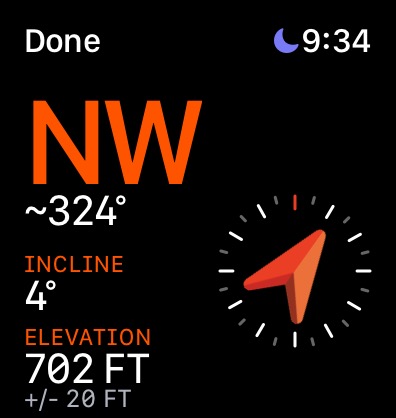 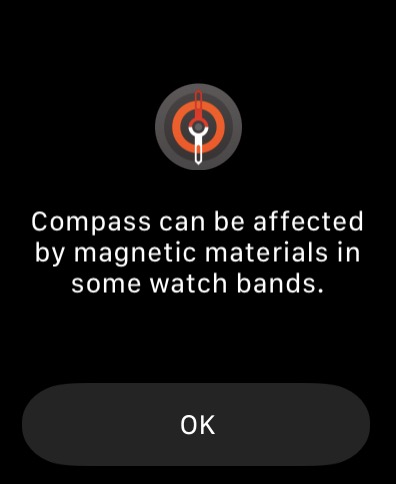 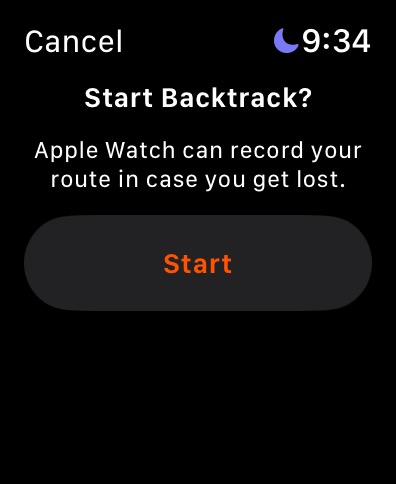 The Apple Watch has long had a feature called "Reserve Mode". This mode is an extreme one that would shut off all functionality of the Apple Watch with the exception of being able to keep and display the time. Power Reserve was a binary choice, it was either on or off, there was no middle ground.

The iPhone has long had a way of preserving battery through a feature called Low Power Mode. When you enable Low Power Mode on the iPhone many of the background processes are turned off, or their refresh rates are reduced. 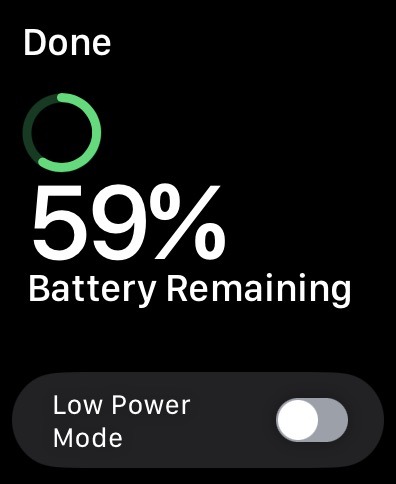 Beyond these items being turned off, there are also other items that are affected including:

You can enable or disable Low Power mode as needed. Low Power is not a feature of only the newest watches. In fact, it is available for any Apple Watch that is a Series 4 or later. You can also view additional information on Apple’s website. Low Power Mode: Apple Support Article https://support.apple.com/en-us/HT213336. Next let us move onto Nike Watch Faces.

Let us say that you had an Apple Watch Series 2 Nike edition and then you upgraded to a regular Series 4 Apple Watch, any Nike Watch faces that you had configured would no longer be available for you to use. This can be somewhat annoying for users of the Nike Watch who upgraded and wanted to continue to use those Nike Watch Faces. The only way to be able to continue to use those would be to upgrade to another Nike edition. This all changes with watchOS 9.

Each of these has its own layout, but each of them can be customized in terms of complications and colors. One of the differences with the Nike Watch Faces is that you have a limited number of options when it comes to color. This is because the faces are designed to correspond to Nike watch bands. As an example, on the Nike Compact and the Nike Hybrid faces you can select any color combination from Summer 2021, Fall 2021, Spring 2022, and Fall 2022.

The Nike Analog, Nike Bounce, and Nike Digital watch faces allow you to select any of the colors from Spring 2017 going forward.

It is good to see the Nike Watch faces available to all Apple Watch users. I am sure that having separate watch models provided additional strain on supply chain, as well as trying to predict how many to manufacture. Beyond this, watchOS also had to know which models could use the Nike Watch Faces and which ones could not and that provided additional overhead for maintaining watchOS.

In some respects it did not make sense to have these versions be entirely separate since they were the exact same as the Aluminum watch, but it is what Apple wanted to do in cooperation with Nike.

The Apple Watch Hermès models still have their own unique Watch Faces. I do not expect the Hermès watch faces to come to other Apple Watches any time soon because the Hermès watches are a more expensive edition and have a more limited user base.

Along with Crash Detection there is a new Temperature Sensor. The temperature sensor is a two-part sensor that is designed to work for being able to sense minute changes in temperature for women who are using cycle tracking. The temperature information can be used to provide you with retroactive ovulation estimates. This is a great addition for women to help them with their reproductive health. I would not be surprised to see the temperature sensing feature be enabled for everyone in the future, or be used for future features.

Lastly, you have some new options for Watch Faces with the availability of the Nike Watch Faces now being available for all Apple Watch users, and no longer being limited only to the Nike Editions of the Apple Watch.

If you have an Apple Watch Series 6, it would be a stretch to upgrade to a Series 8, that is, unless your battery is not holding enough of a charge to get you comfortably through an entire day. If you have a Series 5, or an even older model, then the Series 8 should be a solid upgrade and one worth looking into possibly upgrading your Apple Watch.