Today Apple held their "Peek Performance" event. The event itself was an hour long and included five product announcements including updates to existing products, including the iPhone, iPad Air, and iPhone SE. There were two brand new products introduced as well, the MacStudio and Studio Display. The releases go up in terms of amount of changes as the post goes on. 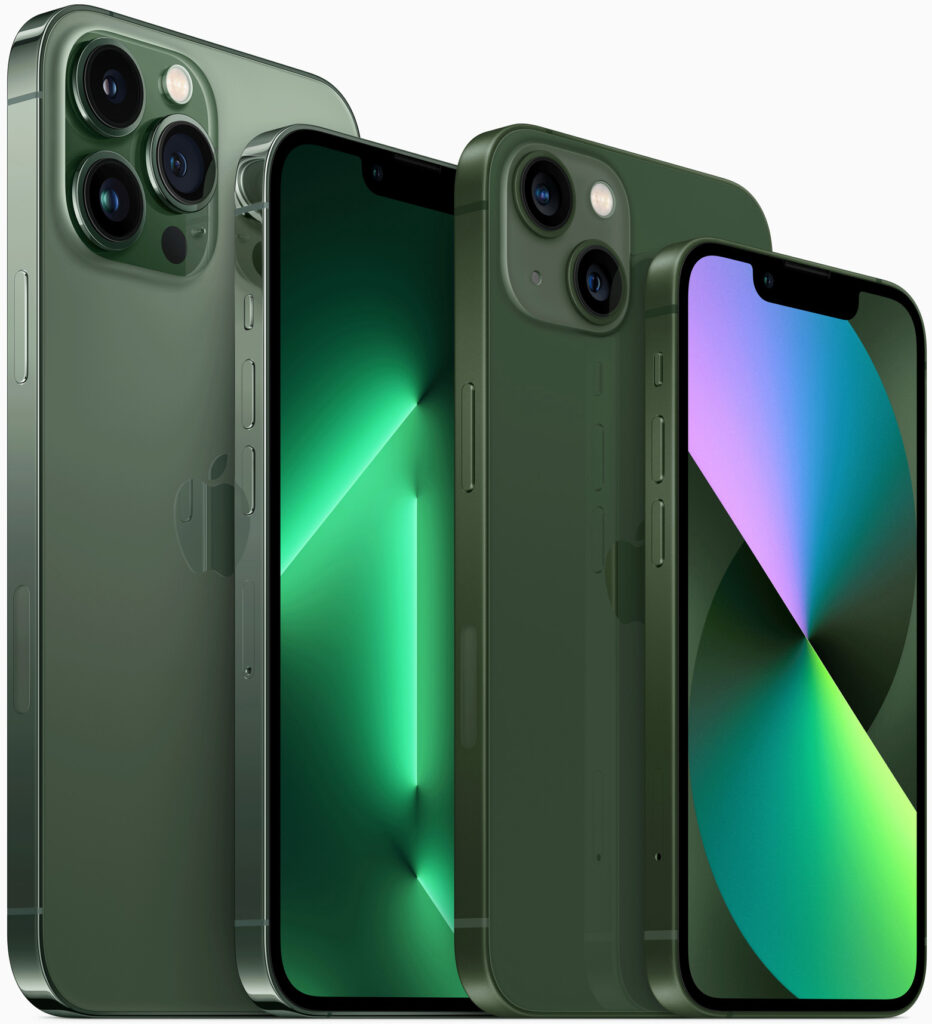 The iPad Air got an update today as well. The 5th generation of the iPad Air is a mix of the iPad Pro and the iPad mini. It still has the same physical form factor, including Touch ID in the Home button at the top. The iPad Air still supports the 2nd Generation Apple Pencil. But there have been some internal changes.

There are three big big changes. The cellular models now support 5G, just like the cellular versions of iPad Pro and iPad mini. The second big change is the Face ID camera, which is a 12MP sensor. It now supports Center Stage, like the iPad Pros and MacBook Pros. 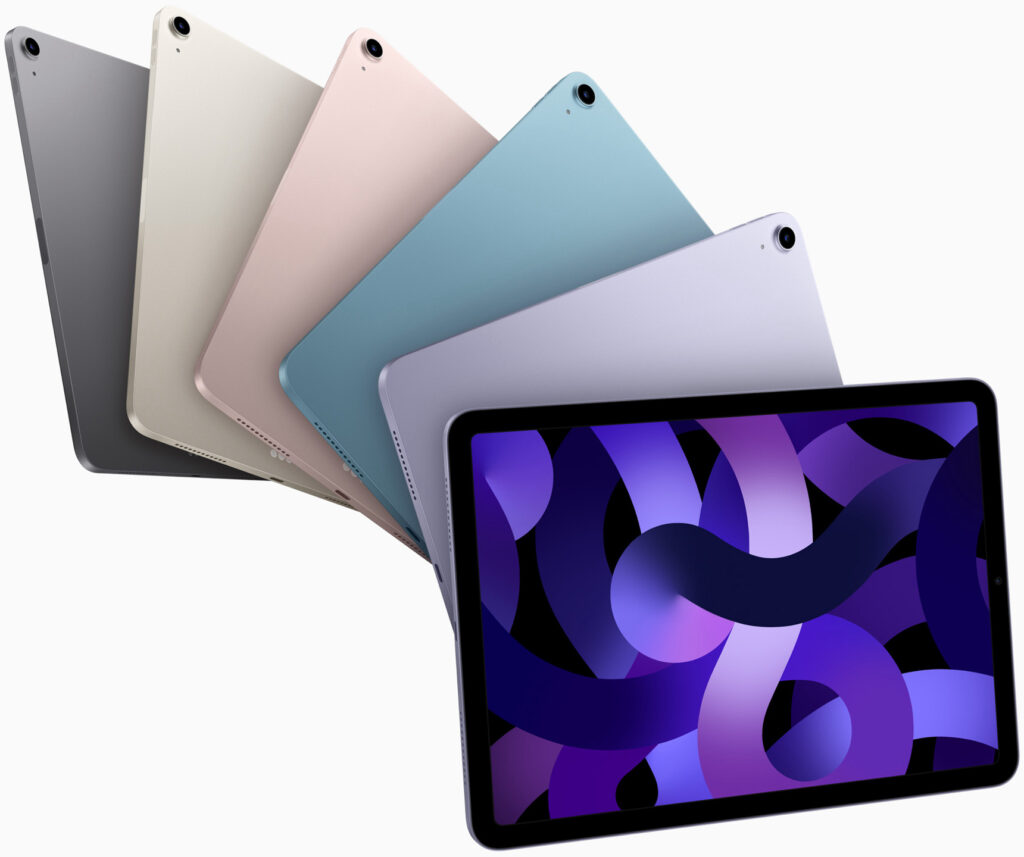 The iPhone SE (3rd generation) is a bit more subtle upgrade. The form factor remains the same, as does the size, and the home button. The iPhone SE now includes an A15 processor, like the iPhone 13 line. This makes sense given the last update to the product was released in 2020. Beyond the inclusion of the A15, the iPhone SE also now supports 5G connectivity and Wi-Fi 6 (802.11ax). 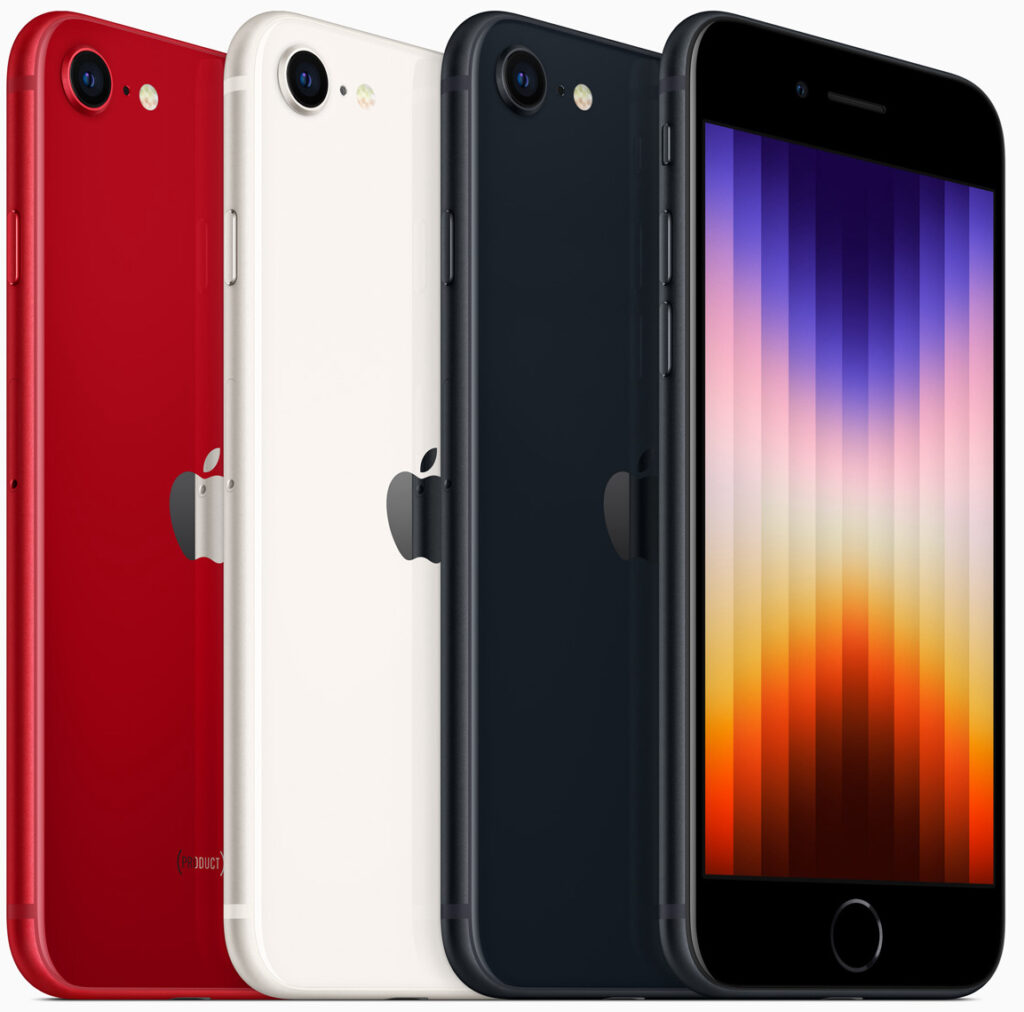 Just like the iPhone and iPad Air, you can order the new iPhone SE starting Friday, March 11th, starting at 5 am Pacific Time and delivery will begin on Friday, March 18th.

That covers the existing products, let us now turn to the new products, Mac Studio and Studio Display. 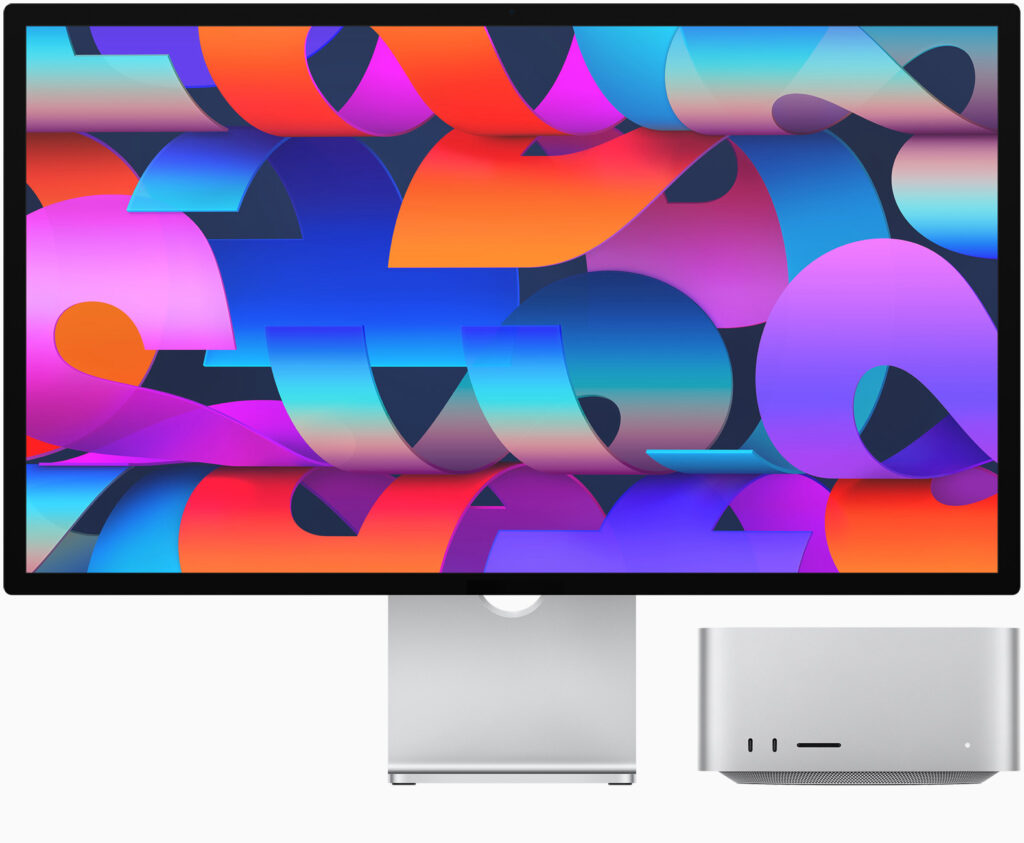 The Mac Studio and Studio Display were designed to work together. We will cover each in turn, starting with the Mac Studio.

The Mac Studio is is the same width as the Mac mini, yet it manages to pack in two more ports in the back. Specifically it has 4 Thunderbolt 4 ports, 2 USB-A ports, a single 10Gbps ethernet port, and a 3.5mm headphone jack. The front of the Mac Studio has three ports, an SDXC card slot and either Two USB-C or Two Thunderbolt 4 ports. Which one of the ports is on the front depends on the internals.

The design of the Mac Studio is dictated by processor. The Mac Studio has two options, the existing M1 Max, and the all new M1 Ultra. You have your choice of 64GB The M1 Max is the same ones that are available with the 14-inch and 16-inch MacBook Pros. There are two M1 Max options, 10-Core CPU/24-Core GPU or 10-Core CPU/32-Core GPU. Again, these are the same options available on the latest MacBook Pro models. You can choose between either 32GB or 64GB of unified memory. 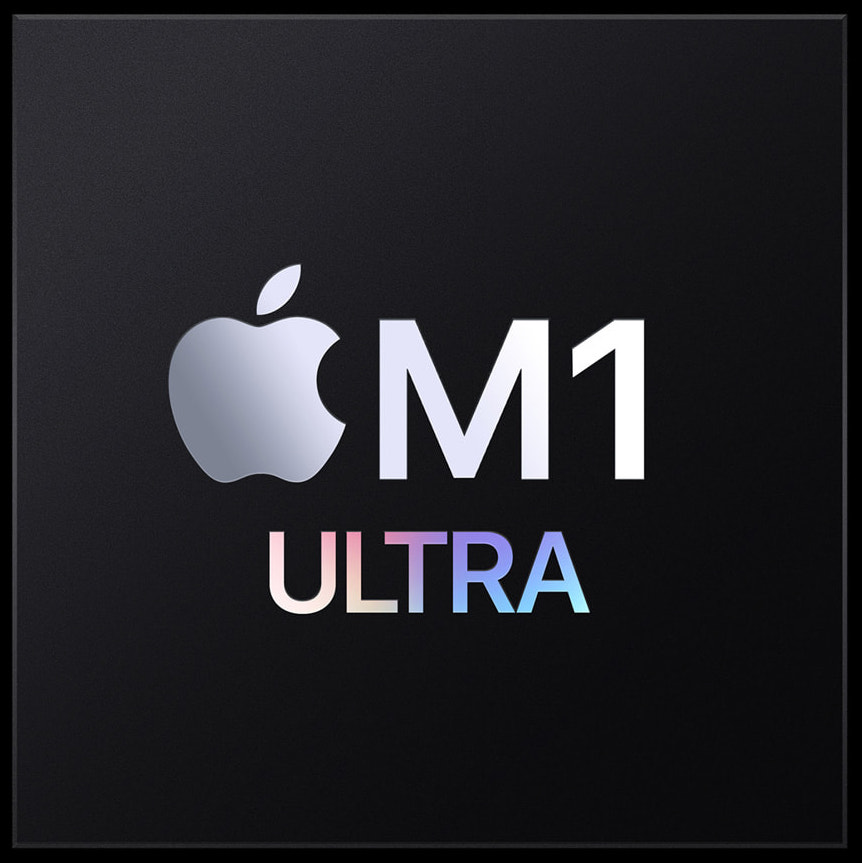 The M1 Ultra is effectively two M1 Max chips that have a custom interconnect that Apple calls "UltraFusion", between the two processor dies. This interconnect allows the two processors to communicate with minimal latency and both processors can access the same shared memory. The M1 Ultra appears to apps as a single processor, so there is no need for developers to make any special accommodations with their apps to take advantage of the power and processing capabilities of the M1 Ultra.

Double the processors results in being able to address twice as much memory, so the M1 can support 64GB or 128GB of memory.

The Mac Studio can be ordered today, but shipping times depend on the configuration. 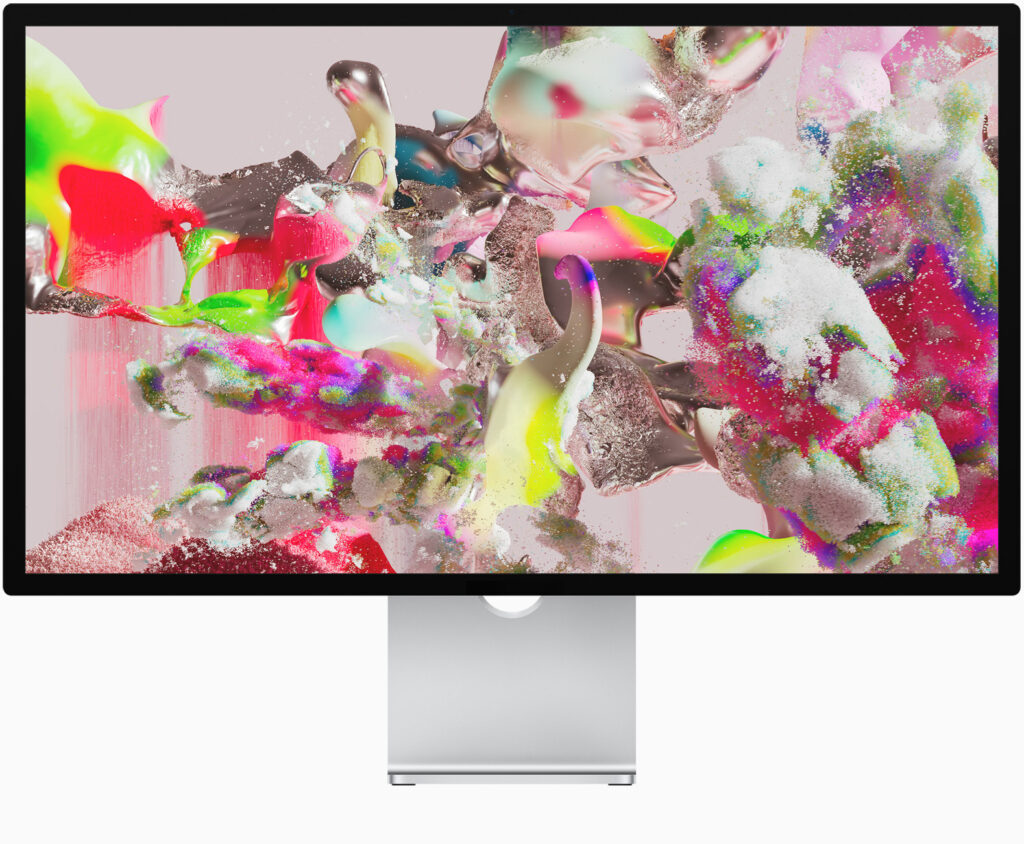 Apple has long had standalone displays. However, that has not always been the case. In fact from 2016 to 2019, Apple did not have its own standalone display. Instead it partnered with LG to provide the Ultrafine 4k and 5k displays. When these were introduced there were some interference problems with the displays and Wi-Fi. In June of 2019 Apple introduced a standalone display, the Pro Display XDR. While this was great for certain groups, it is not affordable for most people. The Pro Display XDR starts at $4999 (without a stand), and is more like $5999 with the stand.

The Studio Display is actually powered by an A13 Bionic processor. The A13 Bionic enables for some features that are currently only available on iPads or MacBook Pros.

The Studio Display includes a "High-fidelity six-speaker system with force-cancelling woofers", support for wide stereo sound. Beyond Wide Stereo sound, it also supports Spatial Audio when playing music, as well as with video, if the video supports Dolby Atmos.

Much like the Pro Display XDR there is a camera built into the display. The one included is a 12MP ultra-wide camera with a 122 degree field of view with an ƒ/2.4 aperture. These the same specifications as the one in the 5th generation iPad Air. This means that the Studio Display can support Center Stage.

The Studio Display has two different screen options, standard and Nano-Texture. There are also three stand options to choose from. The first is the Tilt-adjustable stand, which has a 30 degree adjustability. The second is the Tilt and Height Adjustable stand, which has the same adjustability but can be adjusted up to 105mm. The final option is a VESA compatible bracket so you can mount it on an arm. 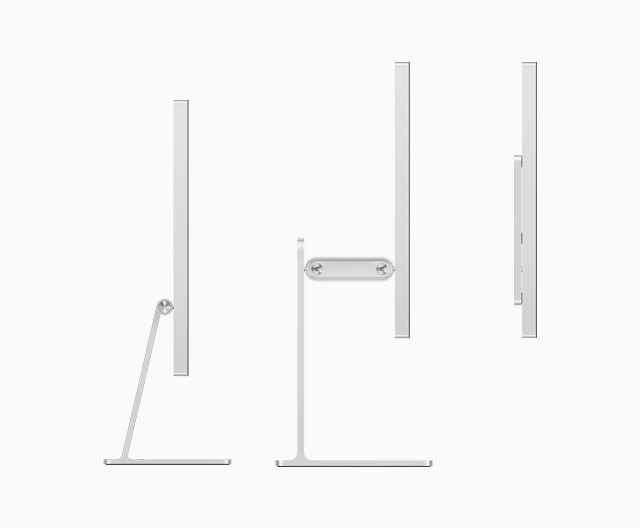 The Studio Display is available to order today. It starts at $1599 for the standard glass and either the Tilt-adjustable stand or VESA mount adapter. The Tilt and height-adjustable stand is available for $1999. The Nano-texture glass version will cost $1899 and $2299 respectively. These can be ordered today and delivery starts Friday, March 18th. However, as of this writing the delivery dates have slipped to March 24th as being the earliest delivery date, and April is for most configurations.

There are a couple of other things to cover. First, Apple has removed the 27-inch iMac from sale. The intended replacement is the Mac Studio and Studio Display. The Intel Mac mini and Mac Pro are now the only Intel-based machines available from Apple.

The 3rd generation iPhone SE keeps the same form factor, but adds an A15 processor and 5G cellular connectivity. There are three colors, Midnight, Starlight, and (PRODUCT)RED. The price has increased $20, probably to accommodate the price difference for the 5G cellular modems. You can order on Friday starting at $429.

The 5th Generation iPad Air now includes an M1 processor with 5G for cellular models. This now includes 8GB of RAM and is available in five colors; Space Gray, Starlight, Pink, Purple, and Blue. The iPad Air is still available in 64GB and 256GB Models starting at $599. You can order the iPad Air starting on Friday at 5am Pacific Time.

The biggest announcements are the Mac Studio and the Studio Display. The Mac Studio is a new Mac that supports either the M1 Max or the new M1 Ultra. The Mac Studio starts at $1999 for a 10-core CPU/24-Core GPU and 512GB of storage.

I will post how I did with my predictions later this week. What do you think about today's announcements?