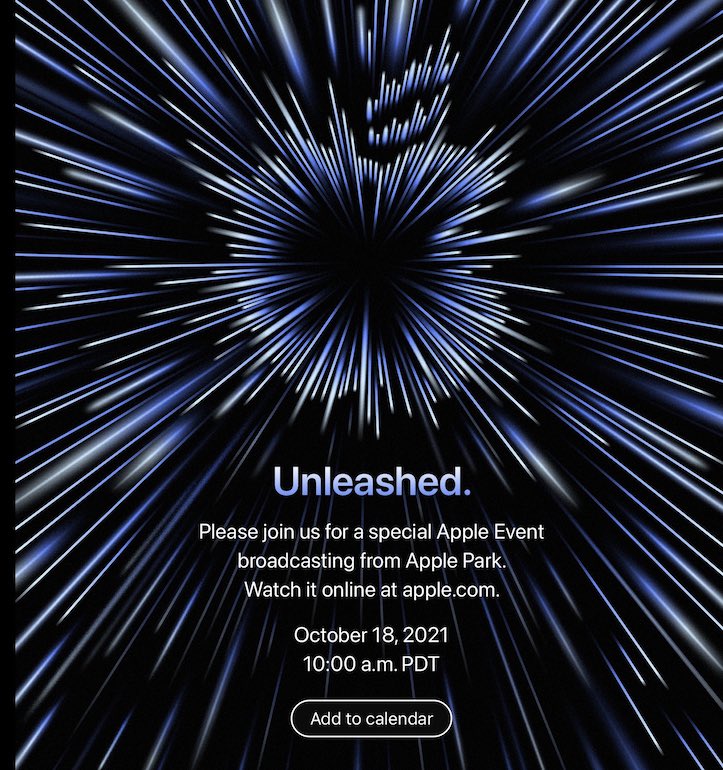 September is generally reserved for iPhones, the is particular true for 2012 going forward. The October 2011 event was when they introduced the iPhone 4s, but the fact that the iPhone was not going to be available in June was announced in June of that year, at Apple's World Wide Developer Conference.

The October event can usually include updates on the iPad and the Mac. Last year was an anomaly due to everything related to COVID. Apple had three fall events last year, the September event was iPads, October's event focused on the iPhone, and the November event was the introduction of the first Apple Silicon Macs.

Since we have already had the iPhone and iPad event, this event will likely focus on Macs. We have already seen some Macs with Apple Silicon. These are the 24-inch iMac, 13-inch MacBook Air, lower-end 13-inch MacBook Pro, and the Mac mini. I think that this event will focus on Macs and there will be some Macs announced. Here are my predictions for the event, starting with the Higher-End MacBook Pro.

I do not think that the two models will have many differences, excluding battery, screen, and weight differences. There are many rumors about what might be in these higher-end MacBook Pros.

The most notable of these rumors if the return of some ports, like an HDMI and an SD Card slot. I am not sure if we will actually see both of these. I could see the HDMI making a return, or even the SD Card slot. This would make the devices more similar to what many consider the "best" MacBook Pros, the models introduced before the butterfly keyboard.

I do not think the MacBook Pros are the only Macs to be introduced. I think there will also be a higher-end Mac mini.

There is one last possibility of a topic and that would be the AirPods.

It is possible that we might see some new AirPods being released, if they are ready and available in enough quantities. I would not be surprised if Apple wanted to have them out last month with the new line of iPhone 13s but they may not have been ready yet.

Here is a recap of what I think we will see at the "Unleashed" event.

Apple's "Unleashed" event streams on Monday, October 18th, 2021 at 10am pacific time. As always, I will have a recap of what was announced as well as a prediction results post later in the week.