Ad: Batman Begins (Amazon Movie)
In the search for his parents’ killers, the disillusioned heir Bruce Wayne travels the world gathering resources to fight injustice and frighten those who sow fear. With the help of his trusted butler, Alfred, Detective Jim Gordon and his ally Lucius Fox, Wayne returns to Gotham City and unleashes his alter ego: Batman, a masked vigilante who uses his strength, intellect and a high-tech arsenal to fight the sinister forces that threaten the city.

Apple’s “Gather Round” Event Round Up

Today Apple held their September “Gather Round” event. As expected, Apple released unveiled new products. But for only two product lines, the Apple Watch and the iPhone. Let us start with the Apple Watch.

The Apple Watch was introduced four years ago in September of 2014 and released in April fo 2015. In the interim releases additional features have been added and they have all fit into the same physical sizes of 38mm and 42mm. The Apple Watch Series 3 added a cellular option. The latest version, the Apple Series 4, offers a whole new look. 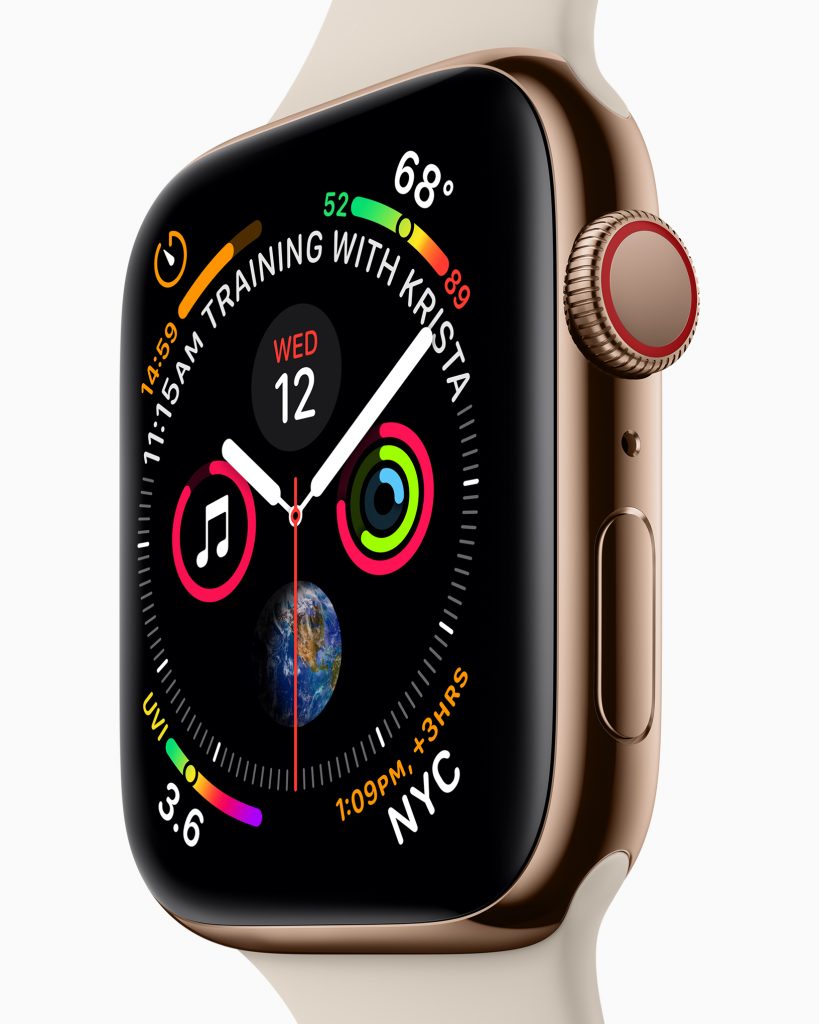 The Apple Watch Series 4 starts with two new screen sizes, 40mm and 44mm. The screens now go edge to edge, and the bezels have been reduced to allow you to see more on the screen at one time. This is because the new screen sizes have over 30% more physical screen. While the screens are bigger, the Apple Watch Series 4 is thinner, by 0.7mm. Your existing Apple Watch bands will still work with the Series 4. Along with the screens, the Digital Crown has been modified to include haptic feedback, which will help you know when an action is taken.

The Modular Watch face, which is the one I use most often, is also getting redesigned to allow more information to be shown from stocks, weather, and other sources. The ability to customize the Apple Watch face even more than you could before will help the Apple Watch become an even more personalized device.

The outsides have been redesigned, but so have the internals. The Apple Watch Series 4 now sports a 64-bit dual-core S4 processor, which is 2x faster than the previous S3. The Apple Watch has been equipped with a heart sensor since its introduction, but there is a second generation heart sensor, which can perform more measurements. This includes when your blood pressure is too low.

The biggest improvement though is the ability to have the Apple Watch Series 4 take an electrocardiogram reading. This is done by starting up the ECG app and placing your finger on the Digital Crown. This will create an electrical loop which will allow the app to gather the necessary data. You can then take the information and send it to your doctor in a PDF format. The ECG app has been approved by the Federal Drug Administration, who is in charge of any medical devices and their claims. It should be noted that the ECG app is coming later this year.

One other area of improvement is the accelerometer. The Accelerometer and gyroscope in the Apple Watch Series 4 has been improved to be able to detect 32 g-forces, which is up from 16 g-forces on the Series 3. This improvement allows for a new motion detection, falling. It is bound to happen to us at one time or another. In a majority of cases the only outcome is the embarrassment when it happens with others around. However, in the event that it is more serious, the Apple Watch Series 4 will be able to do more than just detect the fall. If you do fall and there has not been any movement for over a minute, the Apple Watch Series 4 will automatically contact emergency services. Along with this the emergency contacts will also be notified. It is not a feature that anybody wants to have to use, but in the event it is needed it will be a very welcome change. 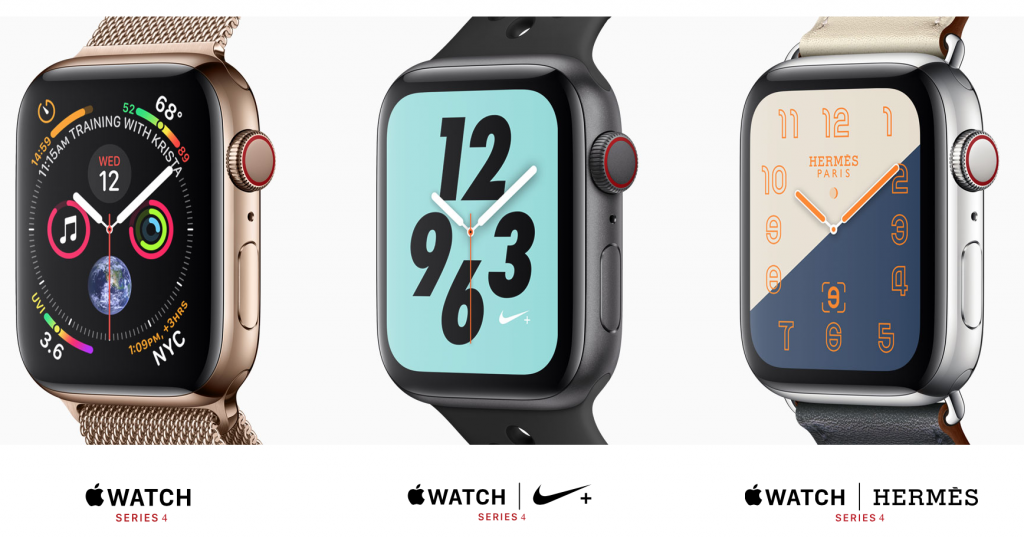 Pre-orders for the Apple Watch Series 4 start on Friday, September 14th at 12:01am Pacific Time. It will be available on September 21st. Now, let us look at the iPhones.

Last year Apple showed off a whole new interaction method with the iPhone X. The iPhone X removed the home button which also replaced Touch ID with Face ID. Many speculated that the iPhone X This year Apple is bringing Face ID to even more of the iPhone line up. Instead of the two new phones that were introduced last year, there are now three new phones, the iPhone XS, iPhone XS Max, and iPhone XR.

The all new iPhone XR has a 6.1-inch LCD display. However, it is also

All of the iPhone have True Tone displays, the Wide Color Gamut (Display P3), and a Fingerprint-resistant oleophobic coating. Now, let us look at the internals.

All three of the new iPhones have an A12 Bionic chip, which is up to 50% faster than the A11, in CPU tasks and 15x faster with Graphics while being 40% more efficient.

The iPhones also has a new Face ID system, which is faster. This is due to the faster storage and even faster secure enclave. There is also an upgraded Neural Network chip. The iPhone XS Neural Network chip houses 8 processors. Last year it was able to process 600 Billion transactions per second. The A12 version is capable of handling 5 Trillion operations per second. The A12 Neural network is capable of performing real-time machine learning with CoreML and through applications. This ability will also work well within Augmented Reality applications by allowing real-time updating of information.

The iPhone XS and iPhone XS Max have an improved camera system. The new camera includes Dual 12MP wide-angle and telephoto cameras, Wide-angle with a ƒ/1.8 aperture, a Telephoto lens with a ƒ/2.4 aperture with Dual optical image stabilization. There is a new feature as well, called Smart HDR.

Smart HDR will take more than just the four images that HDR takes. Instead it will take an additional interleaved set of images, and one additional image. These nine images will then be processed to find the best composite image and will provide you even better quality images. To go with Smart HDR, you can also use the new “Advanced bokeh effect”. The advanced bokeh effect will allow you to change the depth information for a portrait photo after the photo is taken to show the just the right amount of background.

By contrast, the iPhone XR has a single camera lens. But it still sports many of the same features. These include a 12MP wide-angle camera with an ƒ/1.8 aperture, Smart HDR, Portrait Mode with advanced bokeh effect, Optical image stabilization, and much more.

The Face ID Camera has also been improved. It is still a 7 megapixel camera, but it can now support 1080p HD video recording at 30 fps or 60 fps.

One area where the iPhone has not been as advanced as other phones is when it comes to having multiple SIMs. This year, the phones all have Dual-SIM support. Dual-sim support is great if you need to have multiple phone lines, but want to use the same physical phone. This could be having one number for personal and another one for work. Another possibility is when you are traveling. You may want to keep your home phone number but may also want to have one for the local country. The capability for Dual-SIMs is made possible through the use of a physical SIM as well as an eSIM, which has been present in the iPads.

iPhone XS, iPhone XS Max, and iPhone XR will be able to differentiate between the two lines. And you can even label them to your liking so you can easily see who is calling and be able to answer appropriately. There is a special model for China that will have two physical SIMs.

Like last year the iPhone XS and iPhone XS Max come in three colors, Silver and Space Gray. There is also an additional color, Gold. This contrasts with the iPhone XR which has six different colors, Yellow, White, Coral, Black, Blue, and (PRODUCT) Red.

Apple’s iPhones have always had an option to add AppleCare to them. This warranty protects you from accidental damage and allows you to get it fixed for two years. This also includes hardware and software support. There is a new option, “AppleCare+ with Theft and Loss”. This is, as one might expect, more expensive. It includes all of the AppleCare+ offerings, but also provides you with protection against theft and loss. There is one additional payment option for AppleCare+, you can pay for it monthly instead of all up front. This may help some people be able to afford the iPhone and pay for the warranty over time. This is available on all iPhones. Here are the AppleCare+ Costs:

iOS 12 will be released on September 17th and is a free update for all users. On the same day, the HomePod will also get an update which will allow you to do a couple of new things. The first is to make and take phone calls directly on your HomePod. Along wit this you will also be able to start multiple timers on the HomePod, which will be great for some users. The last new feature is the ability to ping your devices from the HomePod to help locate them in the house.

Even though Apple’s September event focused on only two products, the Apple Watch and the iPhone. The Apple Watch has seen its biggest set of improvements to date with the Apple Watch Series 4. This includes as a set of larger screens, redesigned watch faces, and a set of new sensing capabilities. The ability to get an ECG right from the Watch and then being able to send it to your doctor will help many users. What could also help save lives is detecting a low blood pressure situation. The biggest of all though is the new fall detection. In the case that you do fall, if you do not get up within a minute, the Apple Watch will contact emergency services and your emergency contacts, so that you will be able to get the assistance you need.

The new iPhone lineup is one that has something for everyone. All of the new iPhones sport the A12 Bionic processor, edge-to-edge screen, the faster Face ID, faster graphics, processor, and the new Neural Engine and the inclusion of advanced bokeh effect with depth effect control.

The inclusion of the iPhon XR shows that all future iPhones will have edge-to-edge bezels and are definitely the future of the iPhone.