The sixth article in my iPhone X review series is a bit of an oddity, as compared to the other ones written. This one will cover my personal experience about going from an iPhone 7 Plus to the iPhone X along with some other transitions from the past, like going from the iPhone 5s to the iPhone 6 Plus.

The iPhone has now had a total of five different screen sizes in its ten year life. For the first seven years of its life, there had only been two; a 3.5-inch screen on the the first five iPhone models, original iPhone through the iPhone 4s, and the 4-inch model on the iPhone 5 and iPhone 5s. In 2014 Apple eschewed the tradition of releasing a single iPhone model and instead released two different sizes of phone; the iPhone 6 and iPhone 6 Plus. 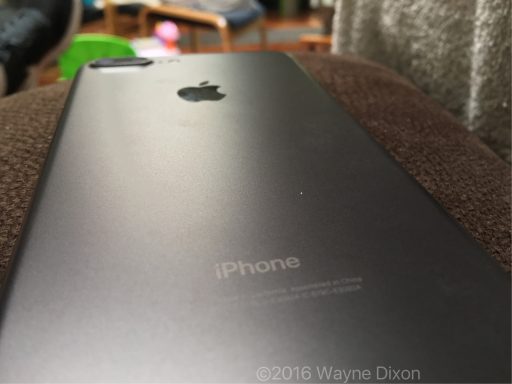 When Apple announced the iPhone 6 Plus, I knew I would end up getting that model. Besides being a significantly larger screen, 5.5 inches compared to 4.7 for the iPhone 6, and the 4-inch screen that I had at the time, there were some aspects about the iPhone 6 Plus that were not on the other models. The most notable feature is the two-column view, while in landscape.

The last differentiating aspect was the second camera on the iPhone 6 Plus. This second camera allowed photos to be taken with optical 2x lens. This would allow for more a wider variety of pictures as well as zoomed in picture to be a bit clearer. Given that the iPhone has always been my primary camera, having the best camera available was definitely an incentive.

Let us take a quick detour back to 2014 when I got my iPhone 6 Plus. You can about read my thoughts on the iPhone 6 Plus after about 10 days of usage. Side note, why did I do my review after 10 days? That just seems a bit strange now that I think about it. How much usage could I really have in 10 days? Anyways, one of the things that I did not mention in that post was that when I initially got the iPhone 6 Plus I actually thought the size might have been the wrong one to get. The extra inch and a half of screen size was a significant jump. The iPhone 6 Plus took a bit to get used to. However, after a couple of hours of usage I went back to my iPhone 5s and began to think that the 4-inch screen was just too small. The bigger screen real estate was just to compelling and you can quickly adjust to having the extra screen real estate than you had than before. Now, let us look at going the other direction, from a 7 Plus to the iPhone X.

Plus to iPhone X 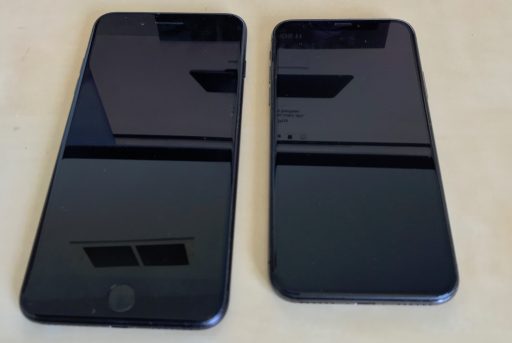 When I first began using the iPhone X, I immediately noticed the difference in size. The physical size of the iPhone X is much closer to the iPhone 6, 6s, 7, or 8 than it is the plus-sized models. After using the Plus phones for 3 years, it took quite a bit to adjust to the different ergonomics of the iPhone X. This did include a bit of time to get used to typing on the smaller keyboard.

Even a month after using the iPhone X, I still cannot type properly on the keyboard. There are often times that I end up hitting the period instead of the space bar. Depending on what I am doing it can be quite frustrating. If you are very efficient with the iPhone Plus sized keyboard, it may be a bigger problem going to the smaller size. I am not sure whether some of the issue is due to some of the machine learning within iOS 11, or if it is just me. Apple is using some neural networks to predict what your next keypress might be and is expanding the touch area for that key to make it a bit easier to tap that key without needing to be 100% precise. For most users this may be a great thing, although it may not be the best for some users.

During my tenure with using the Plus sized screened iPhones, some changes in habit had to be made in order to accommodate the larger phone. One of the downsides of the Plus-sized phones, is actually the physical size. As an example, during the summer the size of the Plus-sized phone was not generally an issue. This is because I normally wear cargo shorts, and no I do not care if they are not “fashionable”, they are useful when you need to carry all sorts of stuff around. However, as the weather grew cooler a change of clothing was in order. Typically this would consist of a sweatshirt of some sort, or hoodie, along with a t-shirt and jeans.

The iPhone 7 did not always fit comfortably within my jeans. I would prefer to keep the iPhone in my front left pocket, with my keys. Yes, I know it is not the best, but it is what is the most comfortable. I do not wear skinny jeans, so that is not the issue. The Plus phones do not fit well in the front pocket, and therefore I always ended up taking my phone out of my pocket and placing it nearby. If I knew I would be walking around for a bit, the phone would either end up in the pocket of my hoodie, or in the back pocket of my jeans. This arrangement meant that I ended up having to take the Plus-sized phone out of my back pocket before sitting down.

iPhone X Back to Plus

Every once in a while I end up going back to my iPhone 7 Plus. When this happens and I look at its design, it appears, to me, to be old technology. In particular, the bezels on the top and bottom of the iPhone 7 Plus seem a bit out of place. The larger physical size take some re-adjusting to get used to it again. I have become quite used to and accustom to the edge-to-edge screen design and it is what I would consider to be “normal” now, and exactly what an iPhone should look like. They do not seem like they should be there. It appears as though the phone is not really an iPhone, at least not to me. I know that people can adjust quickly to technology, and this is a prime example for me.

I do not think the notch is the item in particular, but the rounded corners of the screen on the iPhone X. When I look back at the iPhone 7 Plus, the squared off corner that feel the most out of place, right after the large bezels.

The same does not appear to be the case when I switch between my 12.9-inch iPad Pro and the iPhone X. I do not know if this is due to the iPad Pro being so much larger than the iPhone and the fact that I am not usually not looking at every aspect of the screen all the time, or if it is some other aspect. I will say that when I really look at the iPad, the bezels, even though they are larger than on the iPhone 7 Plus, the iPad Pro’s bezels do not seem as stark of a contrast.

When you first look see an iPhone X you notice the notch. It is the most iconic aspect to the iPhone X. Yet, in every day practice it is hardly noticeable and does not not normally get in the way of what you are doing. This is because Apple allows developers to keep their content within “safe areas”. Only once you double-tap to zoom into a video and make it full screen will any part of the content be hidden. When you do this the video will fill up the sides of the notch, but most of the time, this is not an issue. So if you are worried about the notch, do not be, it really is not a big problem.

One of the more difficult things to go back to, with the iPhone 7 Plus, is not being able to swipe up from the bottom to unlock the screen. I have quickly become used to just swiping up to get to the home screen. I understand why Apple makes this gesture unique to the iPhone X, but it really would be nice to have on the other platforms. Particularly if you have already unlocked the iPhone 7 Plus, or iPad Pro for that fact, with Touch ID. It sometimes takes me a second to realize, oh wait, swiping up does not work on this device. I get that it is what it is, but it is easy to get into a habit.

Even with this all of this, long term iOS users really should be able to switch between various iOS devices without too much difficulty. It will take time for other iOS devices to get the same gestures as the iPhone X and by the time that everyone is comfortable with the iPhone X gestures, Apple will change it again.

Back in 2015, I bought a sixth generation iPod Touch right when they were released. I did this as a way to have a reference device that was running iOS 8. I still have not yet updated the iPod Touch beyond iOS 8. So I do end up having to reference it from time to time. This mostly occurs when I am writing my iOS e-book during the summer, but I do use it from time to time. When I do have to use it, it feels even more cramped than I thought. Similar to going back to the iPhone 7 Plus from the iPhone X, going back to the iPod Touch feels a bit odd. Strangely though, I do not get the same “this feels completely out of place” with the iPod Touch as I do with the iPhone 7 Plus. I do not know if it is because to me the iPod is not a “front of mind” product when it comes to Apple. Just as with the Mac Mini, the iPod Touch is not a product that receives regular attention, it is not known how soon, or if, the iPod Touch will see an update. It would be nice, it may also be nice to see two different sizes, a 4-inch model and maybe a 4.7-inch model, or even a 5.5-inch model.

Even though I do not typically have to go between my iPhone X and my iPhone 7 Plus, there are those times when it will be necessary. The likely time that it will be when I am doing development of my apps, I may be working on wwrite or just working on my own utility apps. I completely get that having to go between different types of iOS devices and having to deal with their different gestures is a very first-world problem. Even though the bifurcation of gestures between iOS devices is minimal, it may end up confusing some users. With the iPhone X being the future, it is only a matter of time before all iOS devices use the game gestures, within limits.

If you are on the fence between a Plus-sized Phone and the iPhone X, I would recommend going to a store and comparing both models side by side. You may find that the Plus-sized phone is what you are looking for, however you may also find the the iPhone X is a better fit for your needs.