The German Oskar Schindler saw in the Jewish workforce a cheap and viable solution to profit from business during the war. With his strong influence within the Nazi party, it was easy to get the permits and open a factory. What might seem like an attitude of a not very kind man, turned into one of the greatest cases of love for life in history, because this German abdicated all his fortune to save the lives of more than a thousand Jews in the midst of the fight against german extermination.

The original Mac was unveiled in 1984, which makes it 33 years old. One of the most iconic Macs has been the iMac. The iMac debuted 19 years ago, in 1998. While there have been a number of form factors throughout the ages, the iMacs overall design has remained unchanged. The iMac has become more svelte as it has aged. The internals have improved significantly over the time. The latest iteration of the iMac if the Mid-2017 iMac.

Given the maturity and longevity of the iMac it is difficult to review the latest hardware, but I shall give it my best shot.

The Mid-2017 iMac is not my first iMac. It is actually my third. My first iMac was a 20-inch 2007 iMac with a 250GB hard drive, running an Intel Core 2 Duo at 2.16GHz, and 3GB of memory. My second iMac was a Mid-2011 iMac with a 1TB hard drive, running an Intel Sandy Bridge at 2.7GHz, and has 12GB of memory. Each of these purchases were done at an Apple Store. This means that they were stock models. The memory was added afterwards. The models that Apple has at the store are the stock models. These are not customized in anyway. The Apple stores generally have different tiers, and these are available at the stores, however there are no customizations at the store. For these purchases, the reason I ended up going with these comes down to price.

Each of the iMacs I bought had a larger version, the 24-inch and 27-inch models respectively. In the case of the 2007 iMac, it was my first Mac, so I did not want to spend too much on my first Mac, just in case. For the 2011 iMac, I would have liked to have purchased the 27-inch model, but I could not justify the cost.

When looking to purchase a new iMac, I did some calculations about the length of time that I have kept my Macs. This came to 6.03 years. I knew it was time to look at getting a new iMac. This information played into my consideration of which model to purchase.

The Mid-2017 iMac that I purchased is the top of the line 27-inch model. The iMac maintains the same form-factor as the 2014 and 2015 Models. It sports a 5K Retina Monitor. The difference with this year’s iMac is that it has a 500 nit display. This display is 43% brighter than the previous models. For me, the difference is easily noticeable when compared to my 2011 iMac.

When a color is displayed on a computer, it is made up of three primary colors, Red, Green, and Blue. On most screens, each of these is capable of having one of 256 values, or 8 bits.. This results in the ability to display 16.7 Million colors.

The 2017 iMac is capable of 10-bit color, or 1024 different values for each color, Red, Green, and Blue. This means that it is capable of 1.07 Billion colors. So just a few more colors than before.

One of the biggest changes for the Mid-2017 iMac is the the ports that are on the machine. The 2017 iMac has traditional USB-A ports. These are USB 3 ports. The old Thunderbolt 2 ports have been removed in favor of the new Thunderbolt 3 ports. Thunderbolt 3 ports are compatible with USB 3.1 ports, or more commonly known as USB-C. The USB-C connector is the new standard for many computers, not just Macs. You can still use Thunderbolt 2 accessories with an adapter.

There is a standard ethernet adapter. The beloved SD Card slot and headphone jack are still present as well.

One of the more recent changes to the iMac line is the inclusion of the Magic Keyboard. The Magic Keyboard differs greatly from the old-style keyboard. There are a couple of major differences. The biggest is that it no longer requires batteries and instead uses a rechargeable battery. The method in which it connects is still bluetooth, but you pair via an included lightning cable.

One of the trends with modern computers is the removal of optical drives. This trend is completely understandable given the tendency to lean towards digital media purchases and streaming. Yet, there may be times when you need to use an optical drive. Apple has covered with a feature called “Remote Disc”. Remote Disc will allow you to share the optical drive of another Mac with any computer that you would like. I never really had a need to use the feature, but I was working on my iOS 11 and macOS High Sierra e-books and wanted to watch a DVD while adding images. The 5K iMac does not have an optical drive, so I used Remote Disc. I put the DVD into my 2011 iMac and connected to the computer. The playback was just as if the disc was being played on the 27-inch iMac. I was only trying to play a DVD, so it was not super data intensive.

On the topic of DVDs, the maximum resolution possible on a 5K iMac is 5120 pixels wide by 2880 pixels tall. The 5K iMac was not my first Retina device, that was the 3rd Generation iPad in 2012. It was not my Retina Mac either, that is my 2015 MacBook Pro. But it is my first desktop Mac with Retina. The number of pixels is not easy to comprehend if you are coming from a non-retina screen. My 13-inch MacBook Pro is capable of 2560 pixels by 1600 pixels. This means that there are 3.6 times as many pixels on the 5K Retina iMac Screen as compared to the 13-inch MacBook Pro. To really get a good comparison, here is an image of 27-inch iMac at its full resolution with a DVD in the corner, which is 480 pixels. 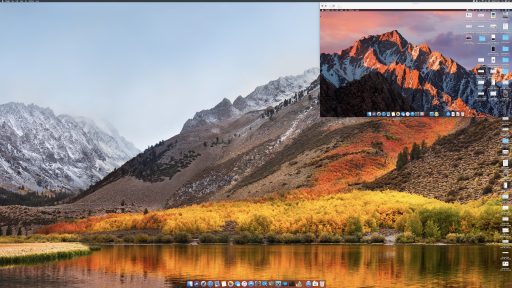 And just for good measure, here is a screenshot comparing all three sizes. 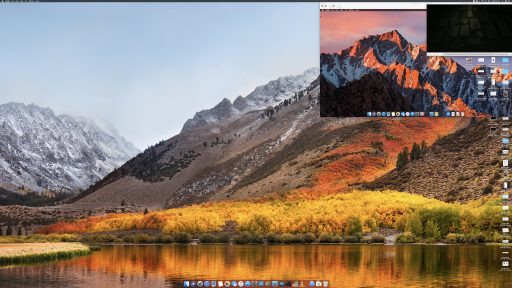 I have settled on using a resolution of 3200 pixels by 1800 pixels. While this may degrade some performance, as the note in display preferences states, it is a trade off I am willing to make. This is because most of the time I need more screen real estate than performance. Yet, if there is a reason why I need performance, I will have that option as well.

I thought I would run some Geekbench comparisons across all of my devices. These were run with the latest version of Geekbench 4. For those who really want to know, below is what I got when I ran the tests.

If you are in the market for a new Mac and want to get a desktop, which is not the most common type of computer purchased these days, then the Mid-2017 27-inch 5K Retina iMac may be right for you. If you know that you need a significantly, and even more, powerful workhorse of a Mac, then wait for the iMac Pro that is coming later this year. While the 2017 27-inch 5k Retina iMac may be iterative over its previous brethren, it is a speedy and powerful machine that is worth an upgrade. If you are in the market to create Virtual Reality content, but the starting price of the iMac Pro, $4,999, is a bit out of reach, then the 2017 27-inch iMac may be a good option.