Today was Apple's World Wide Developer Conference 2016 keynote. As has become the custom, Apple's 10:00 AM Pacific keynote, it is primarily focused towards consumers, with some features shown off to developers. This year's was no exception to this. Apple covered its four major operating systems in the keynote. This recap will only highlight the biggest features.

Introduced just 20 months ago, the Apple Watch has become indispensable for many individuals. The ability to view notifications as well as control applications has become a key function. However, the biggest use of the Apple Watch is health activities. The biggest complaint that users have is the speed of applications. With watchOS 3, there have been some major improvements in all of these areas.

The button on the side of the Apple Watch now has a new function; to show the dock. Just like the dock on your Mac, you are able to switch between all of the applications that you have open. The Dock will show live preview, which means that current information should be shown when you browse to an app.

Health is an important aspect to the Apple Watch. With watchOS 3, you will be able to do even more around your health.

One way that motivates some users is through competition. Apple is enabling you to compare your health stats with only those that you choose. Once you view their statistics, you can send everyone a message. This could either be some encouragement, or more likely, some trash talk. 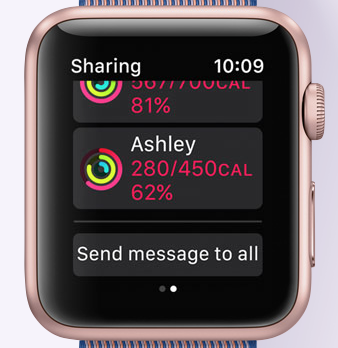 Fitness is great for everyone, yet there are some who are confined to a wheelchair. Apple has thought about this and worked with a couple of organizations to provide alternatives for those in wheelchairs. Users in wheelchairs will now be able to perform exercises for them. One of the activity rings, the Standing ring, does not apply to wheelchair users. Instead, they will receive a new notification, "Time to Roll". 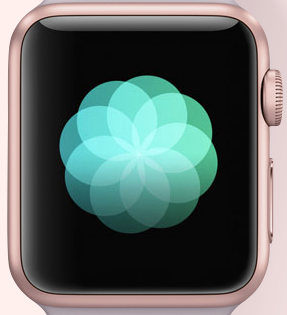 Life in 2016 can be hectic and stressful. Research has shown that taking a few minutes out of the day and doing some mindful breathing can assist in reducing the stress. Apple has introduced a new feature of watchOS 3, a breathing app. As apple states

"The new Breathe app guides you through a series of deep breaths that can help you better manage everyday stress or just experience a few calming moments. Start anytime and let the mesmerizing animation and gentle taps help you focus. See your heart rate when you’re done, and use the Time to Breathe reminders to fit a session into each day."

The inclusiveness of the new health features will allow more people to become even healthier.

Sometimes we are not always within reaching distance of our phones, when an emergency occurs. It may be helpful to contact emergency services. This can be by holding down the button on the side. When a user does this, a countdown timer will begin to indicate that emergency services will be notified. This will initiate a call with local emergency anywhere in the world. Along side this, a message can be sent to your emergency contacts that includes your location so they know where you are located. This will be a big benefit to all users.

There are some new watch faces, specifically Minnie Mouse and you can even choose her dress color. You can quickly switch between faces by swiping from edge to edge.

There are a few new apps as well. These are HomeKit, Find my Friends, and Reminders. Apple Pay is being expanded to allow Apple pay to be used within apps.

Apple's latest platform is the TV. The 4th Generation Apple TV was introduced back in September. Since then it has received some much needed updates, there are even more with the tvOS 10.

tvOS 10 brings a slew of new features to the platform. These include improved Siri, a dark mode, Home Kit, Single Sign-on, and a new Apple TV Remote app.

Siri is an important aspect to tvOS. With Siri in tvOS 10, you will be able to search by any number of things. The first is that you can combine multiple criteria and Siri will be able to understand you. For instance, can ask Siri "Show me all of the Spy movies from the 1960s" and Siri on the Apple TV will show all of the movies that meet the criteria.

Siri can already search a few sources of videos. However, the biggest one in the world will be added, YouTube. This means that you can ask Siri to "Search YouTube for Cute Cat Videos", and the cute cat videos will appear.

This will be a big improvement and leap forward for connected home devices.

Along with this, Apple will show you all of the applications that are able to use your sign on for your provider.

The new Remote app will be able to mimic the physical Siri remote and will have all of the same features. This includes the ability to use Siri to search for something, play games, and even display photos and videos from your iOS device to the Apple TV.

iOS was introduced in January of 2007 with a basic set of features. Each version of iOS has grown to include a bunch of new and much needed features. iOS 10 is no different in this respect. Some of the items included with iOS 10 are: Messages improvements and a Music redesign.

iMessage as a service is one of Apple's most used. It serves hundreds of millions of messages. It is nice to be able to send messages to people, but sometimes you want to spruce it up a bit. Apple has enabled a few more options within Messages.

When you message someone there are times that you want to be able to see what is being sent, without having to open the link. Apple has added previews for links. When a link appears, a preview will automatically be generated, if one can be. It is possible that a preview will not be able to be shown.

You can now perform some actions with your messages, before you send them, in order to provide some nice decoration, to your message. There are four different styles:

Slam will send the message and present it as if it were slammed down. Loud will increase the font size. Gentle will make the font smaller. Lastly, Invisible ink. Invisible Ink will obfuscate the text and require you to swipe to show the text. These changes are great for individual messages, but what if you need something with a it more pizazz. Apple has you covered there as well. 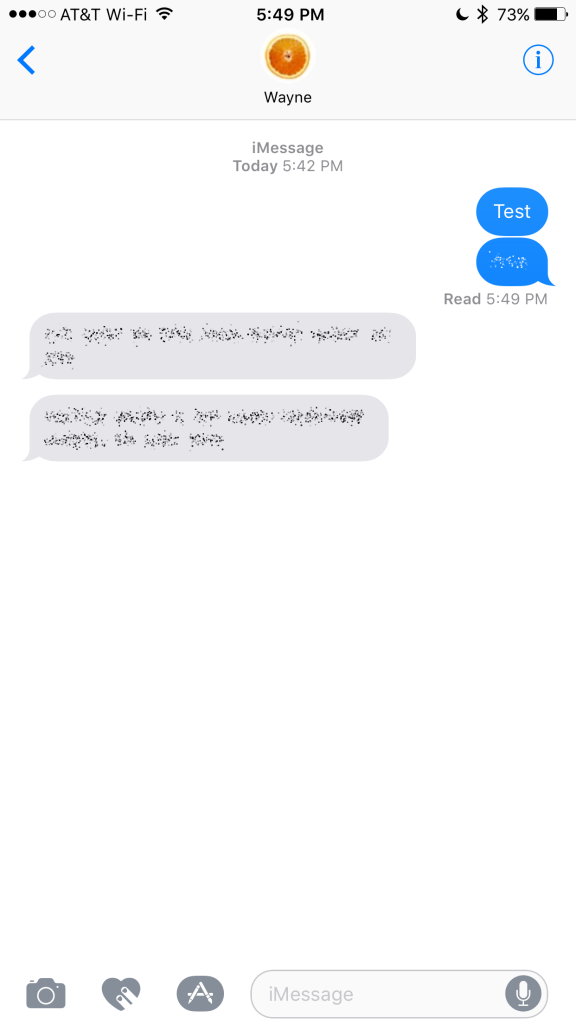 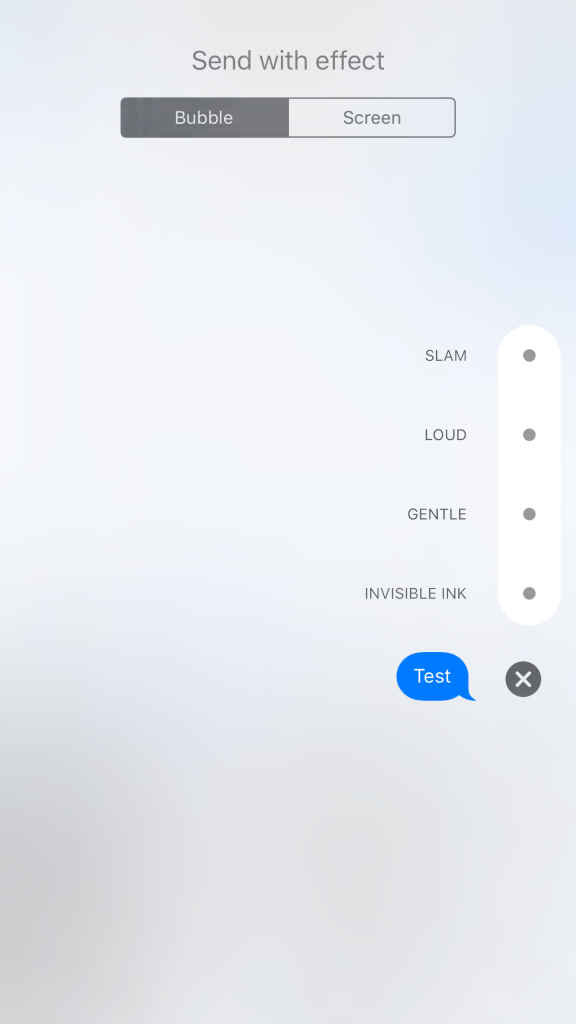 Similar to the ability to make changes to the entire screen to add even more to a message. There are five different screen effects to choose from:

Each of these will perform a different effect once you send a message. These are just a few of the myriad of changes within the Message application.

It can be troublesome to have to unlock your phone jut to be able o see the most recent information. Sometimes, okay most times, it would be nicer if there was an easier way to handle this. With iOS 10, there is such a feature, Raise to Wake.

This will provide you a quick glance at the information that you need to see, right when you need to see it. All without needing to unlock your phone. 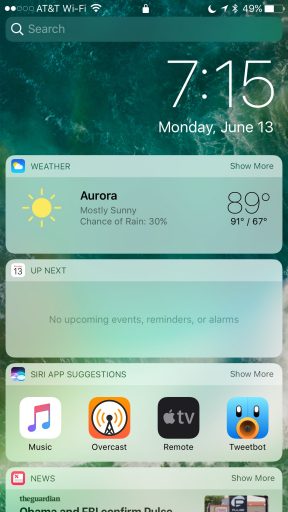 If you are using iOS 9 now, iOS 10 should work on your phone, with the exclusion of one; the iPhone 4s. The iPhone 4s will not support iOS 10. iOS 10 will be a free upgrade to all users in the Fall.

If you want to use iOS 10 sooner than this fall, a public beta is of iOS 10 will be available in July. You can sign up at beta.apple.com.

If you line up all of Apple's platforms, much in this manner:

You will see something a bit askew. The biggest is that one of these things is not like the others; that is OS X. Apple is going to be consistent with its naming and renaming OS X to macOS.

Similar to previous versions of OS X, macOS also has a code name. This one is "Sierra". macOS Sierra brings some new features to the Mac, most notably Photos improvements and Siri.

One of the things that Apple has been working on, behind the scenes, is some Artificial Intelligence. This is most apparent with Siri, but Apple is going further. This time with Photos Apple is adding even more.

Photos will now be able to look at all of your photos and videos and categorize them. This could be anything within the photo. From a watch, to an ocean, to a boat, or even a dog. You will then be able to search on this item.

Similarly, Photos can automatically create different sets of pictures through Memories. Memories will be able to show you your favorite moments, or even some photos that you might have forgotten about.

All of this information is done locally on your Mac, and not transferred anywhere else. Nobody else has the information, only your local device. This is the case for both iOS and macOS.

There are many times that you may want to watch a video, while doing something else. It is possible to arrange the tabs so that you can do two things at once. However, this is not always the best option. With macOS Sierra, you will be able to have a video go to Picture-In-Picture and continue doing the tasks you wish to.

You will be able to move the video to any corner of the screen, just like on iOS.

Developers will have to implement this feature, but it would be well worth their time to do so. Once they do, however, it will be a worthwhile upgrade to viewing video.

Apple’s WWDC 2016 keynote has brought new features to all of Apple’s operating systems. On watchOS 3, you can now call for help without having access to your phone. You can also stay more fit, even if you’re in a wheel chair with specific exercises for you. Along with this, you can also compete against your friends to see who is really telling the truth when they say they’ve done more.

With tvOS you will be able to login to all of your available applications by only entering in your information nonce, instead of each time an app requires the information. tvOS will also allow you to find videos on YouTube. And all of this can be done with the Siri Remote, or with the new Remote app for your iPhone and iPad.

macOS Sierra brings new Picture-in-Picture features, similar to those that iOS 9 brought to the iPad. The new Photos features will help you remember some of the good times you had, particularly if you forgot. With Siri on macOS Sierra, you will also be able to search not just your files, but also perform all of the same Siri searches that your iOS devices can, and even a bit more.

As for my predictions. I will likely post the results of those later in the week.