Leopard has sold over 5 million copies so far, that’s 20% of them have upgraded their computers to Leopard. It’s the most successful launch of an Operating System that they’ve had.

Apple introduced a new product today, Time Capsule. To describe it, it’s basically an Airport Extreme wireless base station with either a 500 Gigabyte or 1 Terabyte hard drive built in. It will allow for syncing over Wireless, and will work with Time Machine wirelessly.

Just like the Airport Extreme it comes with gigabit networking on all of the ports, and 802.11N (draft). The prices are as follows. For the 500GB model it will cost you $299, while the 1 Terabyte model will cost you $499. You can pre-order today, and it will be shipping in February.

The Second thing that Steve Jobs presented was on the iPhone. Within the first quarter the iPhone has grown to consume 19.5% of the smartphone market. It has been 200 days since the iPhone started shipping and over 4 million iPhones have been sold.

The new release of the firmware (version 1.1.3) was released. The new features are…

– Maps with location push pins. This will allow you to keep track of favorite locations and subsequently move the pins around.

– Webclips are website bookmarks on your home screen. They will remember the location on the screen where you zoomed/panned to. You can create up to 9 of them.

– The ability to customize the home screen. You can click and drag the icons around on the screen, put different items within the dock.

– SMS to multiple people (No mention of MMS, but we’ll take what we can get). This should have been included in the initial release.

– Lastly, the ability to see the lyrics within a song. The lyrics are within the ID3 tags (if you’ve added them or used Harmonic to automatically add them).

The software update is available today as a free update to all existing iPhone users.

There are also 5 new applications for the iPod touch. These are already on the iPhone. They are: Maps, Mail, Stocks, Notes, and Weather. They will cost $20 for iPod Touch users (presumably through iTunes).

—Now, can somebody tell me why the hell iPod touch users should have to pay for a firmware update? iPhone users do not, and no previous versions of the iPod have had to pay for firmware upgrades. It seems a bit odd to me.

iTunes was the third thing on the agenda.

So far 4 billion songs sold (as of last week), there were 20 million songs sold in one day on Christmas day. New one-day record for iTunes. 125 million TV shows sold. 7 million movies. Both are way above competitors, but did not meet expectations of projected downloads.

A new feature is available, iTunes Movie Rentals. Touchstone, Miramax, MGM, Lionsgate, Newline, Fox, Warner Brothers, Disney, Paramount, Universal, and Sony are all on board, that is every major movie studio. There are currently over 1000 movies available for rental. New titles will be available 30 days after the DVD release. (This is so they don’t cannibalize DVD sales [for now]). You will be able to watch anywhere on your Macs, PCs, all current iPods and the iPhone.

You will be able to watch the rentals instantaneously (approximately 30 seconds). iTunes Movie Rentals launches today in the U.S. International will launch later this year. Software updates for iPods and iTunes will be forthcoming. the iTunes update is available now, you can get it here.

You ask, what about my nice new HD TV? Steve has taken care of that too…

Apple TV Take 2. You do not need a computer. You’ll be able to Rent movies from your Apple TV. DVD quality AND HD + Dolby 5.1 surround sound. You can listen or watch podcasts. You can browse through your photos from Flickr and Apple’s .Mac service. You can watch YouTube videos, Synching with iTunes (no mention of streaming). You will be able to also rent High Definition movies (Same resolution as DVD, 720 x 480p). They will cost $4.99. 100 titles are available today. You can also preview movies from the interface, and see what other users who have rented that movie have rented.

Photo screensavers can be retrieved from .Mac web galleries. (why not flickr?). You can purchase music right from Apple TV. The new Apple TV is a free software update for owners of the current apple TV. The New software will be out in 2 weeks. And Apple TV has a new price starting at $229 (down from $299). The 160GB Model is now $329.

The fourth, and final, thing: There’s something in the air. Apple introduced a new product called the Macbook Air (MBA). Apple thought 3 lbs is a good target weight, but there was too much compromise with the other features. The MacBook Air is 0.16″ to 0.76″ thick. The thickest part of the MacBook Air is thinner than the thinnest part of the Sony TZ. It fits entirely inside a envelope. The MBA has a Magnetic latch and a 13.3″ widescreen display (same as the Macbook). The display is LED backlit. There is an iSight built-in. MacBook-like keyboard, but with an ambient light sensor. There is also a Multi-touch trackpad. To move a window by double-tap and move. Rotate a photo by pivoting your index finger around your thumb. Of course, pinch-zoom (like on the iPod Touch and iPhone). 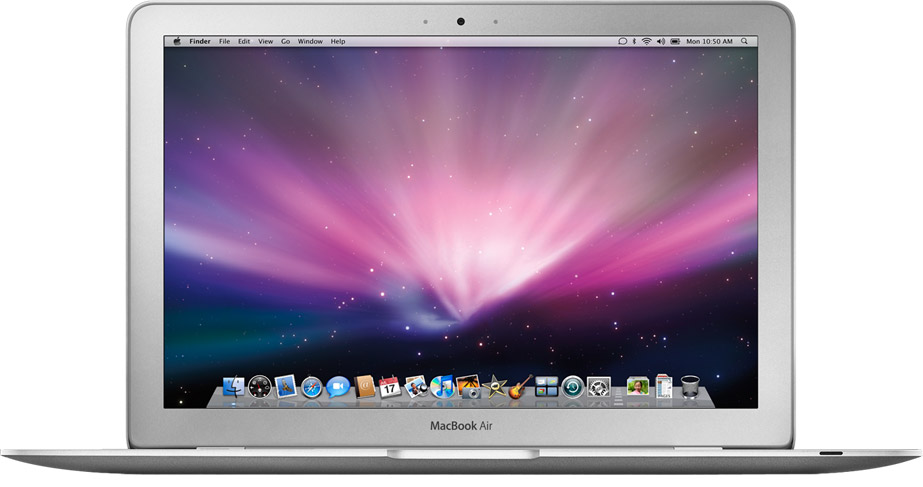